Jessica Brown: Celtic Christianity and the gift of thresholds

The spiritual practices of Celtic Christianity include an appreciation for thresholds -- those literal and metaphorical crossing points that can serve as designated spaces or times to open to God, says a writer living in Ireland. 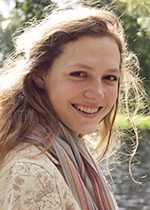 Two years ago, I moved to a little town in County Clare in the western part of Ireland. We live near Holy Island on Lough Derg, home to monastic scholars in the early Middle Ages. Just over an hour away is the rocky, sublime coast of West Clare, with its rich history of monastic dwellings. In this setting, I was eager to connect to Celtic Christianity -- something I’d first encountered at an Episcopal Church in Boston.

The term “Celtic Christianity” is often used to cover a large, fuzzy stretch of times, peoples and places. The alternative term, “Insular Christianity” (“insular” meaning to or from an island), helps narrow this chapter of Christian history to those living in Ireland and Britain in the fifth and sixth centuries. Over time, notions about modes of worship that were not originally codified have gradually become codified.

What are the core teachings of Insular Christianity? In writings from that time, by or about teachers such as Hild of Whitby, Colman of Lindisfarne, Ita of Killeedy, and Aelred of Rievaulx -- and even within our own interpretations of Insular Christianity -- there is an invitation to live with a kind of openness so that earth and heaven are fused in life’s daily round.

As a young mother, for example, I came to treasure the workaday spiritual vision of the Celtic world as I spent my days mashing carrots and washing yet another set of baby clothes.

I think one of the best ways to understand this invitation is through the concept of the threshold. In the Celtic Christian tradition, there are prayers for literally crossing a threshold, but also prayers for the metaphorical crossings in our lives: for dawn and dusk, for the start of a new task, for the beginning of a journey. The threshold is a designated space or time to open to God.

Think for a moment about the threshold.

In a house, it is the opening that keeps the structure from being a closed-in box; the threshold marks the place of setting out, the line that exposes a singular entity to a new day, a new face, the open air. In time, it marks the shift from one region of days into another: a birthday, the start of a new job, an emptying nest, a season of grief.

The threshold is also a marker of transition: between the annual seasons, between night and day, or even between work and home in the short space of a daily commute. In geographical space, it marks the edges of things: land meeting land, shore meeting ocean, earth meeting sky. Even the human body, outward-facing, is threshold-like; our eyes and ears are on the brink of ourselves as we open to others around us.

In his book “To Bless the Space Between Us,” Irish scholar and poet John O’Donohue writes: “A threshold is not a simple boundary; it is a frontier that divides two different territories, rhythms, and atmospheres. Indeed, it is a lovely testimony to the fullness and integrity of an experience or a stage of life that it intensifies toward the end into a real frontier that cannot be crossed without the heart being passionately engaged and woken up.”

The gift of the threshold is that is marks, frames and secures intentional opening, and this brings a praxis of living that steps out of self-containment and monologue. Threshold space deepens the value of the face and words of another; it creates a gap for dialogue; it provides us a hinge point of experience that is not center-of-self; and it beckons to the wild expanses of that which we do not yet know -- territories such as grace, reconciliation, healing and hope.

Can we open the door at the threshold? Can we open to the shift into a new time? Can our eyes and ears open to words and stories not of our own design?

These are big questions. Here are three simple suggestions for marking threshold space, which might bring small -- or big -- answers:

Fit a short-prayer practice into your daily thresholds. Most of us have built-in thresholds throughout the day: arising from bed, a commute, a walk to the mailroom, a break between meetings, even literally going through a doorway. This prayer could be extemporaneous, maybe a line from the Psalms, or perhaps your own version of a Celtic “milking the cows” prayer. This is like the practice of praying the hours, but in an organic form around the unique itinerary and needs of the particular day.

I think the value of marking these transition spaces is to freshen our hearts so that when we face what (or who) is coming next, it is not in an automated mode of transaction but with a kind of readiness to receive what we don’t yet understand.

Cultivate the polyphonic threshold of friendship. When I think of threshold, I picture opening the door to my little townhouse, in its small subdivision of semidetached homes. It’s a short walk to the piers at Kincora Harbor, where the waters of the Shannon River flow out of Lough Derg and then, miles way, through the estuary into the Atlantic. From our upstairs window, I can see County Tipperary across the river, to the ever-shifting colors of the heather- and gorse-covered summit Tountinna.

All these thresholds -- doorway, window, pier into water, river into lake, mountain into sky -- are meeting points between things that are different. This is what friendship is, too: a space where different people -- with different voices, registers, lexicons, stories and certainly opinions -- can meet with regard for each other. What happens when we afford friendship the breadth of a threshold? Thinking about friendship as threshold means that it can become the intentional space to hold differences in relationship, a shared point of encounter and learning.

Pray from the hidden thresholds of the self. As I’ve walked on islands such as Inishbofin and Omey off the western edge of Ireland, I’ve beheld cliffs and shores exposed to the salty winds off the seemingly endless Atlantic Ocean. It’s incredible to think of the people who sought out these places to meet God, building small stone churches and habitats in these open, empty stretches. During the times of Insular Christianity, disciples would travel to these outer geographical rims to seek God in the inner lands of the heart. For there are also threshold spaces within us, lines in our own personhood and life stories -- spaces of questioning, ideas still-forming, old dreams, unspoken hopes, hidden desires, unprayed prayers.

These spaces in the self shift and stretch and yearn, waiting for us to have the courage to travel into them. These spaces, I believe, ask our best questions, tell our strangest stories and search tirelessly for connection that is real. Praying from these spaces might yield a freshness in our discourses with God, and with each other.

Maybe there are windows and doors in the soul -- casements of connection -- waiting to be opened, looked out through, stepped across. Maybe there is a waterway of lovingkindness yet to be traveled, a river that flows through the estuaries, past known land and out into the seas. But first, we must cross the threshold.

Kate Bowler and Jessica Richie: Good enough can be a gracious plenty in the face of impossible expectations

In their new book of devotions, Kate Bowler and Jessica Richie of the Everything Happens Initiative offer brief reflections, resonant prayers and actionable next steps for those who want off the path of relentless individual perfectionism.

In her new book, a writer and public theologian reframes God’s loving expectations for us using a vision of fullness and self-expression, right down to the lipstick.