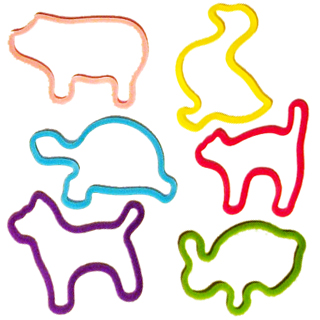 Anyone who is a parent or works around kids has seen children go crazy over Silly Bandz, a broad array of colorful rubber bands shaped like cars, animals, and superheroes, and worn in big bunches on forearms. I was introduced to these back in April when my kids begged me to drive them over to the local drug store in search of a new shipment. It's not just the little ones who are into it. From toddlers to teens, the kids collect and trade Silly Bandz to express their identity and proudly flash a new form of status in the latest hierarchy of "cool."

So, when I visited a church recently I recognized the rubbery trinkets being passed out by greeters at the door. Actually, my kids saw them before I did - "Dad! Dad! They're giving out Silly Bandz!" Smiling volunteers enthusiastically gave away armloads of these pretty toys to excited kids as they came into the service that day.

As you might guess, the ambiance of this church is casual, the worship music is loud, and the "preaching" conversational. The pastor proudly showed off his own Silly Bandz at the beginning of the service before moving on.

But it was after the service when I saw these trinkets work their magic as kids, parents, other church members, and church staff were animatedly talking about their Silly Bandz, trading amongst each other, and telling stories connecting the shape of these bands to the shape of their lives. Strangers made friends, and adults found constructive ways to talk with children. A band shaped like an electric guitar prompted a person to talk about their love of music. Another shaped as an outline of the continental United States got people talking about their summer travels. And ones shaped like a cross were proudly traded around tables in the foyer amidst conversation about Jesus.

Walking outside, I found the lead pastor meeting people. I approached and saw he was chatting with my daughter. Of course, he was asking her about her Silly Bandz and got her talking about the various shapes and themes. He then took off the only one he had left on his arm and said, "You want this one?"

And in that moment, a bond was forged.

Of course, the pastors and volunteers in this church all know this is a little fad, a manic craze that has taken hold of our youth. By no stretch (ha ha) of the imagination are these little rubber bands to be taken seriously. They're "silly." But they're also fun. For a few pennies, the joy these knick-knacks give to children is like gold. And it is easy to see how they create an opportunity for community (including between parents and their children) as the kids go happily sporting their new treasures.

While many may see the use of such things as crassly consumerist -- a bending under the various peer-pressures abundant to all of us in the world today. Yet in this church, the gift of these little ornaments offers a strategic opportunity to meet people where they are. No pastor believes Silly Bandz are important. But right now many kids do. And the goal of ministry as the leader of this congregation understands the mission is to transition people from the vain, ephemeral things they care about today to the substantive, spiritual issues we all want them to care about for the rest of their lives.

Gerardo Marti is L. Richardson King Associate Professor of Sociology at Davidson College in Davidson, North Carolina, and is author of "Hollywood Faith: Holiness, Prosperity, and Ambition in a Los Angeles Church" and "A Mosaic of Believers: Diversity and Innovation in a Multiethnic Church."

Mark Anthony Neal: Popular culture has something to say -- and Christian leaders should listen

The historical connection between black popular culture and the black church might be waning in some ways, but powerful messages are still being preached, says the professor and author.