Since debates homosexuality began to dominate the church landscape, more congregations have called themselves “conservative” and fewer are “in the middle.” 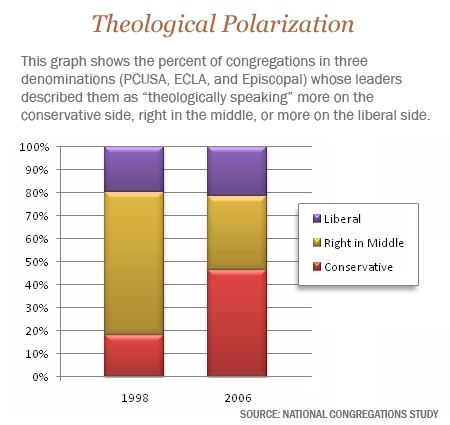 In an article published in a recent issue of the “American Journal of Sociology,” Delia Baldassarri and Andrew Gelman show that Americans are more politically polarized than we used to be, but not because many people have shifted their views towards the extremes on hot-button issues. Instead, increased polarization has occurred because the Democratic and Republican parties have increasingly emphasized hot-button issues, and people consequently have sorted themselves into one party or the other based on their opinions about these issues. This makes sense. If the Republican and Democratic parties do not take clearly different stands on, say, abortion, people will not choose between the parties based on their opinions about abortion. But once the parties make that issue central to their identities, people will be more likely to vote for the party that is aligned with their views. In this way, American politics has become increasingly polarized, even though there is little evidence that many people have become more extreme in their views.

I wonder if something similar has happened in some American denominations. In particular, in denominations with the highest profile national conflicts over including homosexuals in church life and leadership, are people more likely now to sort themselves into different congregations based on this issue? Are more and more churches self-consciously “liberal” or “conservative” than they used to be -- not because many people have altered their views in one direction or the other, but because these views are now more visible within some denominations, and so people’s opinions on the subject are more salient to their religious lives and decisions?

To assess this, I looked at change over time within three denominations for which conflict over homosexuality has been particularly visible since 1998: The Episcopal Church, the Presbyterian Church (USA), and the Evangelical Lutheran Church in America. The graph above shows the percent of congregations in these three denominations whose leader’s described them as “theologically speaking” more on the conservative side, right in the middle, or more on the liberal side. The striking fact is that the percentage of “right in the middle” churches sharply declined, from 62 percent in 1998 to only 32 percent in 2006. This statistically significant decline is balanced by a sharp increase in the percent described as more on the conservative side, from 18 percent in 1998 to 46 percent in 2006. The percent of liberal congregations remains essentially stable. No other denominations moved in this direction. In all other denominations the relative size of these categories either did not change or the percentage of middle-of-the-road churches increased.

We do not know exactly why a church leader who described his or her congregation for the NCS chose the theological category that they chose, so I can’t say for sure that this declining middle represents a response to national debates over homosexuality. Two additional facts, however, suggest that this might be what is behind this shift. First, there is no such trend for these three denominations (or any others) when we look at how their leaders describe the congregations’ political as opposed to theological leanings. So the declining middle in these denominations concerns something specifically theological rather than something broadly political. Second, Methodist congregations move in the other direction -- a significant increase in the percent of congregations described as theologically right in the middle. Perhaps this is because, although the United Methodist Church has fought about homosexuality as much as these other groups, the UMC’s national governing body, unlike national bodies within the Episcopal Church, the PC(USA), or the ELCA, consistently has voted on the conservative side of the issue.

In short, it seems that in the Episcopal Church, the PC(USA), and the ELCA, churches that lean in the conservative direction on homosexuality may have been pushed by national developments within these denominations to declare themselves to be more theologically conservative, even though their views may not have become more conservative over the last decade. If people within a denomination now are more likely to sort themselves into congregations based on those congregations’ stand on homosexuality, this could produce fewer churches with theologically middle-of-the-road identities. If churches are forced to choose sides on an issue, people will be more likely to choose churches based on which side they are on.

In American politics, increased polarization has been a top-down rather than a bottom-up affair. It has been driven by political parties’ increasingly large differences on hot-button issues rather than by people’s changing views on those issues. Something similar may have occurred in American religion.