Mark Chaves: Congregations are followers rather than leaders

Congregations are slightly wealthier and better educated than a decade ago. But those numbers are misleading. In fact, congregations tend to mirror social changes rather than catalyze them. 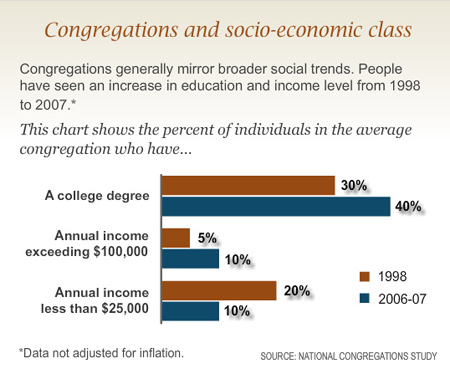 But these numbers are misleading. In fact, these numerical differences between 1998 and 2006-07 reflect stability rather than real social change. They do not take inflation into account. Moreover, they closely mirror income and educational trends in the general population. There has not been upward or downward social mobility among American congregations in the last decade. Rather, congregations’ socioeconomic position in American society remains unchanged since 1998.

Socioeconomically, congregations appear to mirror broader social trends. And this is true in other arenas as well. As I have described in other posts, the NCS data show more ethnic diversity in congregations, but this reflects increased diversity throughout American society. Worship services are more informal, but this could reflect a larger trend toward informality in American culture. Congregations show huge increases in their use of information and computer technologies, much like other organizations and households across the country. In all of these ways, congregations reflect rather than shape or resist the world around them. They are followers more than leaders. They are rearguard more than vanguard. Only when it comes to the relatively rapid aging of their leaders and their people (the subject of a previous post) does it appear that congregations are ahead of a demographic or cultural trend.

Certainly some exceptional congregations lead rather than follow, and there may be ways in which even the average congregation bucks cultural and social currents. Overall, though, it seems that American congregations tell us more about where American culture is or has been than where it is going. Perhaps this is inevitable in a voluntary religious system. American congregations are essentially voluntary associations whose long-term survival depends on local support. This is a source of great strength in American religion, but it might also lead to religion that mirrors more than it shapes culture.