Do religious institutions face a decline in public confidence? Well, yes, but the long view provides some nuance. 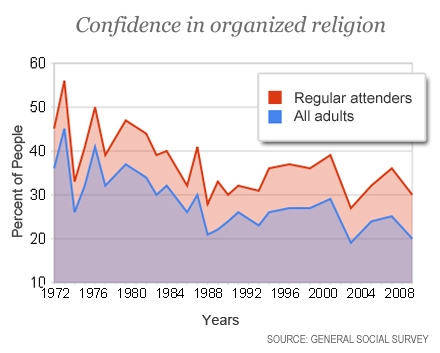 In a New York Times op-ed published on March 14, 2009, columnist Frank Rich reported these results from the 2008 General Social Survey: “Twice as many Americans have a ‘great deal’ of confidence in the scientific community as do in organized religion. How the almighty has fallen: organized religion is in a dead heat with banks and financial institutions on the confidence scale.”

This is true as far as it goes, but taking a somewhat longer view adds perspective.

Since 1973, the GSS regularly has asked the American public this question: “I am going to name some institutions in this country. As far as the people running these institutions are concerned, would you say you have a great deal of confidence, only some confidence, or hardly any confidence at all in them?” The figure above shows the trend in the percentage of people saying they have a great deal of confidence in leaders of organized religion, and it shows that trend both for all adults and for those who say they attend religious services at least once per month.

Between 1973 and 2008, the number of people with a great deal of confidence in religious leaders declined from about 35 to under 25 percent. Higher percentages of regular church attendees express a great deal of confidence in religious leaders, but the trend is the same. It is difficult to know which leaders of which religious organizations people are thinking about when they answer this question (local leaders? national leaders?), but if you lead a religious organization you probably will find this a disturbing trend under any interpretation.

This trend looks bad, but it is important (if not very comforting) to recognize that the situation is not unique to religion. Confidence has declined across a range of American institutions. Americans are less confident in the leaders of many kinds of institutions than they were in the 1970s.

That “on average” disguises a lot of variation. Different institutions inspire quite a wide range of public confidence. The percentages of people in 2008 who expressed a great deal of confidence in the leaders of various types of institutions are, from the most to least confidence-inspiring institutions: military (52), scientific community (40), medicine (39), U.S. Supreme Court (32), education (30), organized religion (20), banks and financial institutions (19), major companies (16), organized labor (13), executive branch of the federal government (11), Congress (11), press (9), and TV (9). Religion is in the middle of the pack, well below the military, science, medicine, the Supreme Court, and education.