Mark Chaves: Does anyone remember the faith-based initiative? 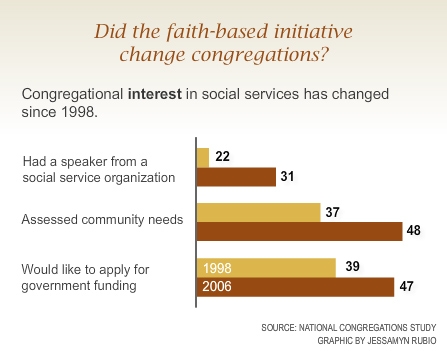 A brief recap: Beginning with welfare reform in the late 1990’s but picking up speed when George W. Bush became President in 2001, government officials at every level looked for ways to increase congregations’ and other religious organizations’ involvement in social services, and they tried to increase the flow of government money to congregations and other religious organizations. The media paid a lot of attention to these efforts, reporting mainly on the debates they provoked. The debate produced more heat than light, however, not least because people overlooked the fact that religious organizations, including congregations, long have played a role in our social welfare system, and they long have received public money to support their human services programs. Still, the faith-based initiative tried to enhance that role and alter its character in certain respects.

What effect did the faith-based initiative have on congregations?

Reasonable people can disagree about whether these numbers represent a glass half-full (“look how much congregations contribute to our social welfare system!”) or half-empty (“congregations should do more!”). But the amount of water in the glass has not changed since 1998.

There are nuances. For example, the data hint at the possibility that the faith-based initiative may have led some congregations who already were involved in social services to intensify their effort by devoting slightly more staff and volunteer time to these activities. But these hints are too faint to alter the basic conclusion: the faith-based initiative increased congregations’ interest in social service programs, but it did not change their behavior.

Why the faith-based initiative accomplished so little is a subject for another day.