'Okay, you can give a talk from the pulpit -- but no preaching.' 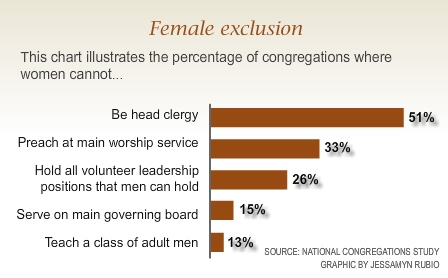 I noted in a previous post that the number of congregations led by women still is a surprisingly small 8 percent. One main reason this number is not larger, of course, is that several major religious groups still do not allow female clergy. Half of American congregations are either in denominations that do not permit female clergy or are independent churches that do not allow female head clergy.

It probably should not surprise us that, whatever rules a denomination or congregation has about women’s ordination, women are called upon to do the work (especially the unpaid work) that needs to be done, whether serving on governing boards, teaching Sunday School, or occasional preaching. Churches have to do some fancy rhetorical footwork when they need women to do work that their own rules prohibit women from doing. For example, in some groups women can give a “talk” or a “speech” from the pulpit during a Sunday service, but not a sermon; in others women can “teach” from the pulpit but they can’t preach from the pulpit; in still others a woman can teach a class containing adult men because she is “under the authority” of the head pastor, even though he never comes to the class.

Be that as it may, gender equality has progressed farther in lay leadership than in ordained ministry or head clergy jobs. But it has not progressed far enough in any of these domains.