Melissa Wiginton: A pulpit can burn a flame

I started the year by attending the National Festival of Young Preachers in Louisville, KY, hosted by the Academy of Preachers. For three days, 120 people between the ages of 14 and 28, from 30 denominations and 30 states, preached. That’s it. They preached, they listened to each other preach, and then they worshipped together and heard the word preached again. Some were making their first trip to the pulpit and others are already pastors of churches. 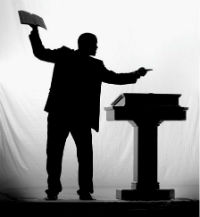 We heard good theology, bad theology and no theology at all -- and not everyone would agree with which sermons I put into which category. Some folks stepped out when a preacher invoked God’s punishment on gay and lesbian people; others said, “Amen.” Many of the young people had never heard an African American or a woman preach, worshipped in a Roman Catholic cathedral or seen a Greek Orthodox priest.

Why did they come? In the words of one young man, “Because [they] still believe that a pulpit can burn a flame to say ‘Let my people go.’”

Do you? Do you believe a fire that changes the world can start in the pulpit?

The festival itself could spark something. In American culture where we isolate ourselves from people with different religious, political or economic positions, these very disparate people sat together for three days and listened to each other. Yes, some stepped out and no doubt some zoned out. But no one interrupted or talked over or yelled or called names. Civility, at the least, and curiosity, at their best, stood as the poles which anchored the space. At the end of the day, they sang and prayed in one sanctuary.

The young man’s sermon was titled “The Prophetic Voice.” He spoke of Satan and the “Giant Triplets: Materialism, Racism and Militarism.” He proclaimed that the world is going to have these discussions with or without the church’s input, so the church should lift her voice and say, “I am a member of a different society…I am the son of a King. And he’s looking to adopt.”

Christians are children of a King, and the National Festival is a kind of family reunion. So, try this in your neighborhood. Have your own ecumenical preaching festival -- not just for young people. Pick a passage and pull your pulpits together: One day of preaching the message you bring to your community and of listening to a word from the Lord claimed by someone whose door you would not normally enter. Practice civility and curiosity. Stage a witness to a reality we don’t see on Fox News or MSNBC or any other public venue.

Experiment with a different kind of society -- one lit by the fire of the Holy Spirit.

Melissa Wiginton is Vice President for Education Beyond the Walls at Austin Presbyterian Theological Seminary.

Louise Hansen: Animals play a part in our spiritual lives

Including pets in church services can be one way to re-imagine the meaning of fellowship and worship.