Editor’s note: As the Christian landscape changes, leaders must ask and answer a new question: What’s the future of denominations? This reflection is part of an occasional series that offers the thoughts of people across American Christianity on this vital issue. To see the entire series, click here.

To be sure, 2009 was a difficult year -- one marked by layoffs, service reductions and program elimination. Yet the grim reality is that 2010 presents even more significant challenges for denominations in the United States, their leaders and the leaders of Christian institutions that relate to denominations. It will no longer be enough to wonder about short-term, cost-saving measures. We need to ask a new set of questions.

James Surowiecki noted in the April 20, 2009, issue of The New Yorker that the temptation of organizations in economically challenging times is to worry about “sinking the boat” -- or trying to ensure survival by bailing water until the storm passes. Such attitudes are understandable for leaders to adopt, especially for Christian institutions devoted to the well-being of employees and their families and to the noble purposes that brought them into being.

Surowiecki explains, however, that the best organizations don’t want to “miss the boat,” so they spend, research and spread their message through a recession. Not blinded by uncertainty, these organizations take risks -- examining broader cultural and societal trends, clarifying their mission, revamping their very structures not to survive short-term but to thrive long-term.

Sadly, the "sinking the boat" mentality describes the plight of mainline denominations. I often hear denominational leaders worry that we have become dinosaurs and that the future belongs to independent megachurches, parachurch organizations or secularity. Just as worrisome, some denominational leaders aren’t captured by fear and are, unknowingly, acting like dinosaurs -- blithely working as if nothing has changed and preparing for a “revitalization” that looks like a return to a half-century ago.

But everything has changed, and we cannot return to the past.

There remains significant promise for Christian denominations in the United States in the coming decades. Delivering on that promise, though, will mean confronting crucial questions that enable us to clarify mission, vision and strategies and thus become willing to lead adaptive changes within our institutions.

Question 1: Toward what end are denominations moving?

Complicated theological, political, economic and sociological histories underlie denominations in the United States. Our tendency has been to focus on particular distinctions in ways that too often blind us from the most fundamental question: What is the end of our existence as a denomination?

This is important in the double sense of an “end.” What is the mission for which a denomination exists? And are we willing for our existence to come to an end for the sake of greater faithfulness to the gospel? Presumably, the answer to the first part of the question ought to be a specification of “bearing witness to the inbreaking Kingdom of God.” However, we often seem to take that for granted in ways that render us inarticulate when asked about the people and mission that denominations serve.

The second part of the question ought to remind us that God’s purposes are larger than any particular denomination. We all must be open to be transformed, or even to die, in the hope that more faithful Christian witness can be articulated and embodied. Articulating that openness is difficult yet clarifying, and keeps us focused on the end that really matters.

This is a question raised in the wake of an emerging “congregationalism” in the United States, made even more visible by the powerful emergence of independent (or at least quasi-independent) megachurches. In a memorable conversation last year, one Christian leader warned me not to focus too much on denominations because the “real energy” seemed to be found in megachurches and parachurch organizations. He clearly has an important insight. Go to an event organized by a megachurch, and you are likely to experience incredible passion and energy. A denominational event often feels more like a wake.

Even so, many of those megachurches and even parachurch organizations are beginning to look more like denominations as they grow and plant new congregations or communities. They now are developing new methods for educating and training their Christian leaders and devising new funding structures for their work. To be sure, their strategies and structures will look very different than those whose current forms were developed in the middle of the 20th century. This movement does not undercut the need for denominations, but rather calls for a closer look at their purpose and how best to organize them for the functions that allow for the thriving of their constituent institutions, including congregations.

In asking about the central functions of denominations, we can open our imaginations to models other than the bureaucratic structures prevalent in the mainline. Historically African-American denominations, for example, have tended to be less bureaucratically structured because they have faced more systemic opposition and lacked significant economic resources. That has made them more nimble in their organizational structures.

This question presumes that, for the foreseeable future in the United States, denominations do serve essential purposes. They are critical resources for the cultivation of thriving Christian communities, and they nurture social networks as well as establish and develop educational organizations and resources both for making disciples of Jesus Christ and forming faithful and effective Christian leaders. It would be a tragedy if we “reinvent the wheel” by always starting new Christian institutions, rather than simultaneously helping to renew the remarkable institutional assets that already exist.

Question 3: How is Christian ministry -- lay and ordained -- most faithfully articulated in relation to the leadership needs of congregations in the United States?

Denominations are facing a cluster of theological and organizational issues around the identification, recruitment, formation, certification and ordination of Christian leaders for congregations and other Christian institutions in the United States. Too often we have separated the theological and organizational conversations, and in recent years those conversations have begun to careen into each other in confused and confusing ways.

We have had standards for ordination on the one hand while also developing patterns of funding, credentialing and deploying professional ministers that have been driven more by organizational needs than theological understandings. As a result, we have often not been sufficiently attentive to educational needs, both for clergy to fulfill their vocations well and for laity to develop their vocations in both the church and the world. We need new degree programs and non-degree training to equip clergy and laity for vibrant ministries in the church and the world. One essential purpose of denominations is to offer clarity about the standards for lay and ordained Christian leadership.

The economic downturn exposed structural problems that denominations and other Christian institutions would have needed to face over the next decade or two; it just compelled us to face them in an enormously compressed timeframe.

Many mainline denominations have financial costs for pensions, health care and assumptions of lifetime tenure for clergy that increasingly appear to be unsustainable. By contrast, many independent congregations or smaller denominations offer no support for pensions or health care and are built on models of bi-vocational pastors that are difficult to sustain over time.

Addressing this question means that we will need to overcome our American tendency toward gnosticism, which Harold Bloom identified as “the American religion,” and have serious conversations about money that are theologically informed and economically sound. That itself is a daunting challenge in many contemporary American contexts.

Further, we will need to design strategies for funding essential Christian institutions that serve mission and vision rather than just trying to ensure the survival of particular organizations. The danger is that Christian philanthropy will become focused more and more on budget relief, and wealthy Christian individuals within denominations -- a declining group given current trends -- will be besieged by more and more requests from denominational organizations competing for fewer and fewer philanthropic dollars.

Despite the current economic climate and potential trends, there is not so much a money problem in American denominations as there are mission, vision and organizational structure problems that manifest themselves as money problems. Yet we will not be able to address any of those problems without creative exploration of new economic models for establishing, sustaining and renewing Christian institutions.

What’s the future of denominations? To be sure, we could break down that question into more than four component parts. What seems beyond doubt is that we need to ask it and that in doing so we might discover the promise for denominations in the United States. By framing the big questions fruitfully and faithfully, we may discover that we have not missed the boat and that our sails are set in the direction the Holy Spirit’s winds are blowing. 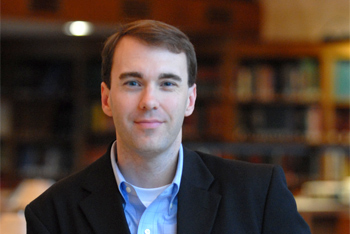