The inner life of a fictional church in the Midwest is the subject of a novel by the bishop who served the North Alabama Conference of the United Methodist Church from 2004 to 2012.

Link to author Will Willimon
By Will Willimon Professor of the practice of Christian ministry
Monday, January 28, 2013

Editor’s note: In this excerpt from the novel “Incorporation,” the Rev. Simon Lupino, longtime senior managing pastor of Hope Church, preaches on the third Sunday of Easter; the Rev. Stephen Smith, the church’s new, inexperienced youth minister, listens from the pews.

On Sunday, when Simon held forth from the Hope pulpit, preaching ful­somely on the assigned gospel reading, Luke 24, the supper at Emmaus, he took as his text the apostles’ “But we had hoped he would be the one to redeem Israel.” It seemed to Simon a fortuitous linkage with the needs of the congregation. His primary homiletical mode had been (since long ago tossing what he remembered of two 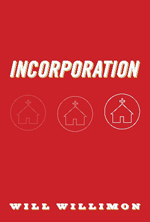 anachronistic preaching courses in seminary) what he called “needs-based preaching.” A one-sentence defini­tion of Simon’s homiletic modus operandi: Out of love for my congrega­tion, I am a preacher who speaks in plain English to the felt needs of real people living in today’s real world.

Simon thus strove to use the archaic biblical texts as a pretext for addressing the congregation’s collective need, as a point of departure for a journey deeper inward. This Sunday, Luke 24 would be creatively utilized for a thematic sermon in which the preacher would castigate those “small-minded, small-futured people who have neither the inspiration nor the imagination to hope.” Thus he congratulated the delighted congregation who were seated before him:

He was drumming his fist on the pulpit, his resonant voice raised to the level of the histrionic.

I’m tired of naysayers and Chicken Little-pessimists with their carp­ing, negative criticism and their small-minded perspectives. Chicken Little, Henny Penny, Ducky Lucky be damned! Give me people who dream, give me visionaries who are bold enough to think new thoughts, give me a new humanity able to rise up and assume its God-given, heaven-sent opportuni­ties! Give me Hope! Hope! Hope! Hope!

Stephen, listening, thought, “Jesus, the empty tomb, and Chicken Little?” He wondered if Dr. Lupino tended to overdo the style thing. His gestures seemed forced. True, Stephen was seated in a pew near the front, so he might not have been the best judge. Maybe this sort of preaching worked when witnessed from afar. Maybe everything in church looked better at a distance.

He could tell, from the fussing and fuming, the pounding and ex­pounding, that the Senior Managing Pastor was worked up over some­thing, though it was difficult to say just what. Was this sermonic “Hope! Hope! Hope!” a swipe at Quail, maybe Grimball too?

Stephen’s inexperience was showing. The inspiration for Simon’s ser­mon had been a popular clergy journal a couple of years ago.

There was a short prayer, a final hymn, then the benediction. Simon had always taken care to pronounce the benediction in front of the congre­gation, with his arms extended, looking them in the eye, his voice strong and reassuring, as a kind of complementary ritual conclusion to his earlier sermonic thoughts. As in preaching, in blessing a congregation, style was everything. In the early days of his ministry, he had found the act of pas­toral blessing to be one of the most daunting functions of ministry. To say, “God bless you” seemed an awfully presumptuous demand to make upon God. On some Sundays, when he stood before them to bless them, and they all looked directly at him, for a moment Simon sensed the threat of a surging tidal wave of human need. Twenty years had given him intimate knowledge of their lives. He knew secrets and had witnessed some of their inarticulate pain. Most of their suffering was silent and banal, but still, Simon had found that being a witness to the quotidian agony that people hid from the gaze of others was one of the great burdens of ministry.

Although Simon had often said that one of the reasons why he was drawn into ministry was that he wanted to respond to people’s need, to assuage their hurts and cares, he had underestimated the depth of their need. Sometimes, imperiled by the rising tide of their cumulative misery, he felt he might drown in their pain. For his own self-protection, he now kept his interactions with them polite and brief; one with them but not one of them, he was careful not to give them opportunity for exaggerated self-expression or embellished lament lest they elevate their aches and pains to the level of anguished despair while in his presence. He had reached his quota as a repository of their dark secrets.

He intoned in a genuine-sounding voice:

Go forth to love and to be loved by God, to be the best that you can be, confident that you are blessed. Amen.

Bustling to the back of the nave while the choir sang something about the road rising to meet you and the wind being at your back, Si­mon dutifully greeted people at the door. Everyone seemed satisfied with the production. As he grinned and hugged profusely, Simon struggled to hide his annoyance that the Easter crowd had dwindled so quickly in the succeeding Sundays, though it was almost reassuring to have the church sliding backwards toward normal.

“Dr. Lupino, Dr. Lupino,” said a breathless acolyte, tugging at his robe as Simon was giving a farewell hug to the last dawdlers of the exiting con­gregation. “Dr. Lupino.”

“I think we’ve got a problem,” said the boy.

“In the service. Somebody dead,” the boy breathlessly explained. “As we were picking up the bulletins, just like Ms. Swanson makes us, and re­placing the pew pencils -- even though we’ve told her that we’re supposed to be at soccer practice at one and this will probably make us late -- George noticed old man Lazar slumped down in the pew.” George, standing near­by, nodded his head in confirmation, somberly adding, “We’re already late for practice.”

“So we looked at him, even tried to push him, and he just fell over to the side. George thinks old man Lazar might be just sleeping real hard, like in a coma like on TV, but I think he’s dead.”

“What in God’s name?” said Simon as he rushed out of the narthex and back into the sanctuary, looking right and left.

“Over there, that pew just behind the pillar,” said one of the acolytes. “See? He’s dead.”

“I think I’ve had more experience with dead people than you,” said Simon to the boy. Sure enough, there was old Lazar, slumped over to the left, mouth gaping, eyes rolled back in his head. After a quick examina­tion -- sniffing his breath for alcohol and then detecting a slight movement of his chest -- he determined that Lazar was neither dead, as he feared, nor passed out drunk, as he expected. Simon grabbed his shoulder and forcefully shook him.

“Lazar! Lazar! Are you alright?” he said in a booming voice that echoed throughout the empty sanctuary. “Wake up!”

“Ughh,” moaned Lazar. His eyes opened. He looked up, focusing his wild eyes on Simon, who had now unhanded him and stood there, with the two acolytes, looking down upon him. Lazar then straightened him­self, pulled his jacket closed, smoothed back his rumpled white hair, took another confused look at Simon, belched heavily, and, without a word, stood and walked toward the exit.

“He sure looked dead to me,” said one of the boys as Simon pushed them aside and headed back toward his office.

George sighed, “Coach is going to give us almighty hell.”

Willimon, Will, “Incorporation,” © 2012 Wipf and Stock Publishers, Eugene, Ore. Reprinted by permission of the publisher, all rights reserved.

Will Willimon: The incarnational quality of fiction

The theologian and bishop has written a novel he calls an “affectionate but truthful” rendering of the mundane and the majestic in church life.

Jamie McGhee and Adam Hollowell: ‘Either we mean it, or we don’t’

The authors of a new book frame a path for reflection and action based on the works of James Baldwin.

Recent nationwide efforts to ban books endanger our society and our spirits.