Afraid to preach and teach about money in your congregation? Don't be.

Breaking the taboo about money talk can be fruitful for congregations, a new study shows. The more congregations talk about money, the more likely they are to see a corresponding increase in giving, according to the National Study of Congregations’ Economic Practices.

Congregations courageous enough to talk openly about money are more likely to see their revenue streams grow than those that treat the topic as taboo, according to the recently released National Study of Congregations’ Economic Practices, the largest nationally representative survey of congregational finances in a generation.

The study, conducted by the Lake Institute on Faith & Giving at the Indiana University Lilly Family School of Philanthropy at IUPUI, examined the practices of receiving, managing and spending financial resources in 1,231 U.S. congregations between 2014 and 2017.

Among the study’s key findings:

But significantly, that revenue growth was more prevalent among congregations that regularly discussed the theological importance of giving, whether through biblical passages, sermons or personal testimonies.

Though many clergy remain squeamish about addressing finances with their congregations, those who do can help promote healthy economic practices among members, and a culture of generosity within the congregation, said study co-author David P. King, the Karen Lake Buttrey Director of the Lake Institute on Faith & Giving.

“They’re releasing the power of money in the organization when they’re unwilling to let it be a taboo or silent topic,” King said.

According to the study, though the vast majority of congregations appealed for money weekly during religious services, primarily by passing a collection plate, only 9% of them actually set aside time each week to teach or preach about giving. Of that 9%, 90% reported an increase in revenue between 2014 and 2017.

That pattern held as well for congregations that broached the subject less frequently.

Of the 12% of congregations that said they addressed the issue monthly, 73% reported increases in revenue.

The study notes that teaching on giving need not be limited to religious instruction about where, when and how much to give. Instead, congregations can roll that into larger conversations about materialism, consumer culture and responsible money management.

For instance, King said, 31% of congregations reported offering groups or classes focused on personal finance -- a prime opportunity to explore principled economic strategies, including charitable giving. Black Protestant congregations led the way in this regard, with 54% offering this service, according to the study. 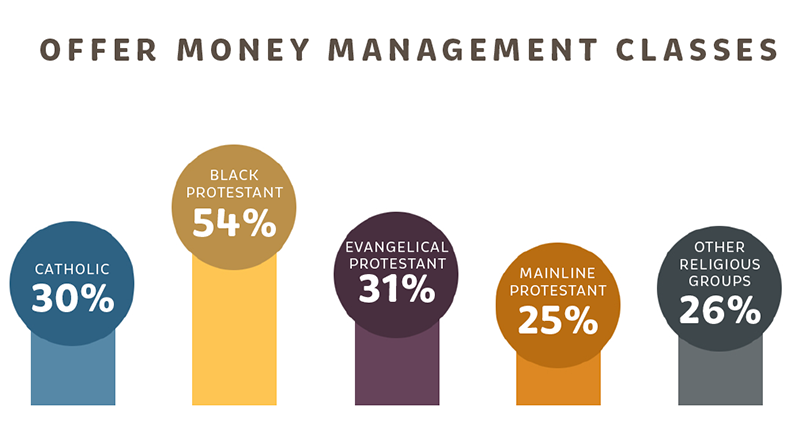 A larger proportion of black Protestant congregations -- 59% -- also experienced an increase in revenue between 2014 and 2017, more than the evangelical Protestant (51%), mainline Protestant (48%), Catholic (31%), or “other” congregations (53%), a category encompassing a variety of world religions, including Jewish, Muslim, Buddhist, Hindu and Unitarian.

“A first place to start would be not to talk so much about what to give or how much to give with people in the pews but have broader conversations about the meaning of money -- how it makes us feel, our experiences with it, our barriers to giving, getting people to tell their stories, testimonies in worship services,” King said.

“When it shows up in the lectionary, don’t avoid it. Bring those questions to bear in service. People are primed and ready to give. We just need to give them avenues to give on-mission.”

While congregations continue to receive the largest percentage of charitable giving in the U.S., 29% of all such giving ($125 billion in 2018), that’s down from 50% in the 1980s, according to the study, which was funded by a $1.67 million grant from Lilly Endowment Inc.

A fluctuating economy, a decrease in the number of households giving to charity, and an increase in the number of nonprofit organizations competing for that money have all contributed to the drop. More than ever, congregations need to make the case for why they are the best stewards of charitable giving, King said.

That can be especially challenging for clergy who may be uncomfortable diving into a congregation’s finances, a topic not necessarily covered in seminary.

While the leader of a large nonprofit organization would be expected to know who its major contributors are, only 55% of congregations in the study reported that the head clergyperson had access to participants’ giving records. And among those congregations, only 58% said the clergy actually looked.

Those who reported not looking cited the potential for preferential treatment or influence based on how much individuals gave. Yet among those congregations where clergy said they did look at donation records, 58% reported an increase in revenue over the three-year period of the study -- with 42% noting an increase of 10% or more.

“Can you imagine the executive of a major nonprofit not knowing who their major donors are?” King said. “We’re squeamish to talk about money, so we don’t know what’s going on in our organization. But the time for being humble and shy in making your case is over. The time for talking about money as if it’s taboo in a congregation should also be over.”

While 40% of congregations said they relied on those individual donations for nearly all their revenue, others reported raising money through special fundraisers, like bingo and bake sales, renting out facilities, collecting program fees, and so-called “passive income,” like investments, endowments or bequests.

Roughly 72% of all the money raised was spent on personnel and facility costs, while the rest supported programming (10%) -- with the largest chunk of that (35%) spent on worship needs -- and mission or outreach efforts (11%), which ranged from food and clothing donations to disaster relief and substance abuse counseling. Researchers will delve more specifically into congregations’ service work as part of a spin-off study, King said.

In addition, they intend to conduct face-to-face interviews with 100 of the clergy who participated in the original study to examine more specifically how their congregations regard money from a theological, cultural and practical perspective, he said.

Questions will include how often those clergy preach about giving, what texts are used in the process, and whether clergy have avoided preaching on a topic for fear it would negatively impact giving.

Dustin Benac, a member of the research team and a doctor of theology candidate at Duke Divinity School, recently conducted 17 interviews with pastors up and down the East Coast. He said he hopes that marrying the quantitative data gathered during the first phase of the research with the qualitative stories shared during the second phase will prove illuminating for congregations seeking to strengthen their finances.

“In talking to pastors, they’re hungry for this type of material,” he said.

For now, said King, there’s no one right way to attract, manage and spend revenue within a congregation, and any changes adopted in the wake of the study should be sure to keep the congregation’s existing culture in mind.

For instance, in this day and age, having a digital tool for giving can be helpful. But if the pastor has spent months railing against screens, then introducing an app or a text-to-give option may not be an immediate financial game changer.

King stresses that religious leaders don’t need an MBA to discuss finances with their congregations.

“You may feel you’re underprepared to read a balance sheet or understand investment strategies, but you’re well-equipped to be a leader,” he said. “Building relationships through conversation, tackling tough topics, knowing how to lead an organization around deeper cultural questions -- that’s what clergy do well. So remember those skills you have.”

Religious institutions need not live out of a scarcity mindset. Our religious communities are full of the necessary assets to cultivate a culture of generosity, writes David P. King, the Karen Lake Buttrey Director of Lake Institute on Faith & Giving.

Laura Ullrich and David Brown: Why pastors should understand economics

Economists live in a world of scarcity. Christians believe in God’s abundance. In this conversation, an economist and a pastor talk about the ways in which that tension plays out in ministry and life.

More than 550 congregations took part in Lake Institute’s survey about the pandemic. While their finances have been impacted, many faith communities are adapting, which will be critical moving forward.

Melissa Spas: How do you fundraise and ask for major gifts? Don't pitch. Nurture relationships first.

Fundraising is about forming relationships, sharing the mission of your organization, and inviting others to participate, writes the managing director for the Lake Institute on Faith & Giving.

A theologian’s book emerged from theology done in partnership with disabled Christians.