This way of describing oneself is more common than it used to be, but its prevalence should not be exaggerated. The vast majority of Americans--approximately 80 percent--describe themselves as both spiritual and religious. 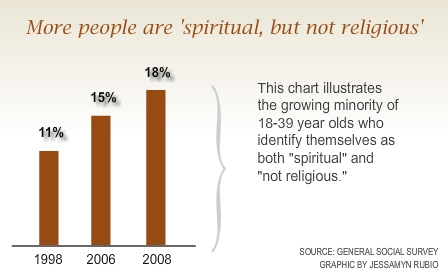 Interestingly, there are more “spiritual but not religious” people today because nonreligious people are more likely to say they are spiritual, not because people are less likely to say they are religious. In 1998, 24 percent of those low on the self-described “religious” scale said they were spiritual; that increased to 35 percent in 2008. A generic, diffuse type of spirituality seems to be on the rise, perhaps also indicated by small but noticeable recent increases in belief in miracles and in life after death.

What does the growth of this “spiritual but not religious” segment of the population mean for organized religion in the United States? If what people mean when they say they are spiritual but not religious is that they are generally concerned with spiritual matters (whatever that means) but they are not interested in organized religion, then this trend indicates a growing minority of the population whose spiritual inclinations do not lead them to become involved in churches, synagogues, or mosques. This kind of generic, diffuse, and unorganized “spirituality” may provide a growing market for certain kinds of religious products, such as self-help books with spiritual themes, but, even if it continues to rise, it is difficult to see it becoming a solid foundation for new kinds of religious institutions or new forms of religious collective action.