Mark Chaves: why are there (still!) so few women clergy?

Only about 5% of American churchgoers attend a congregation led by a woman. The year, in case you're checking, is 2009. 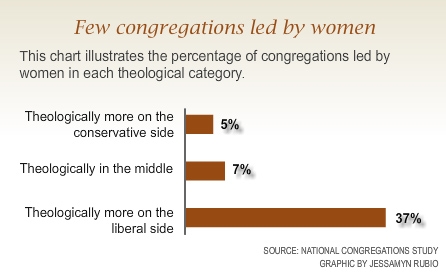 After several decades of women entering the ministry in large numbers, why are there still so few congregations with female head pastors?

Several factors are relevant. First, even though the percentage of women enrolling in Master of Divinity programs grew dramatically in recent decades, that percentage peaked in 2002 at 31.5% and fell slightly to 30.6% by 2006, according to the Association of Theological Schools. The percentage of women seeking the M.Div. degree may have stabilized after three decades of rapid increase.

Third, and probably most important, gender discrimination continues to exist within American religion. Several major religious groups still do not permit women to lead congregations, and, even within denominations that have ordained women for decades, many congregations still resist hiring a woman as their pastor. As Jackson Carroll reported in his 2006 book, God’s Potters: Pastoral Leadership and the Shaping of Congregations, female clergy now earn the same salaries as male clergy when they work in congregations of comparable size and location. But women still do not land the most desirable congregational jobs at the same rate as men.