Mark Chaves: Why do fewer black churches have websites than their white counterparts?

An astute comment here on C&R sent Chaves back to his study. His hypothesis, that the gap reflects a difference in resources, was only partly right. 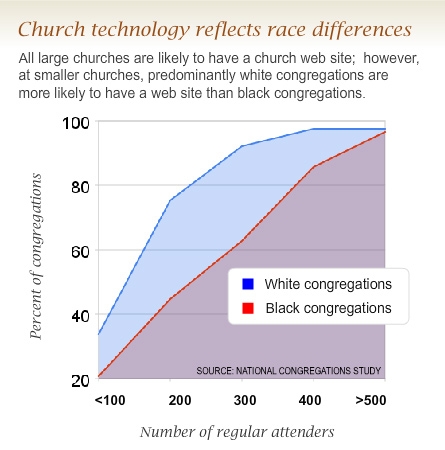 Commenting on my post documenting the tremendous rise in congregations’ technology use, Terri Dean wondered why African American churches lag behind white churches. She speculated that it had to do with the age of ministers, with younger clergy more open to these technologies. I responded that I didn’t think the race difference in technology use had to do with the age of ministers since pastors of black churches are, on average, no older than pastors of white churches. I also speculated that the race difference mainly reflects resource differences between black and white churches. Since it takes resources to launch and maintain a website, and since black churches, on average, have less money and lower budgets than white churches, I speculated that the digital divide in the religious world is mainly a matter of resources.

Inspired by Terri’s comment, I examined whether the race difference in church technology use is wholly explained by resource differences. It’s not.

But I was partly right. Resources do matter. As the figure above shows, for both black and white churches, the bigger you are the more likely you are to have a website. And the race difference in websites gets smaller as churches get bigger, with no difference at all for churches with 500 or more regularly participating adults.

But resources are not the whole story. Black Protestant churches of almost every size are substantially less likely than white Protestant churches to have a website. Websites are nearly universal for white churches with more than 200 adults, but they are universal among African American churches only for churches with at least 500 adults. This graph focuses on the relationship between the number of attendees and having a website, but the pattern is the same if we look at other technologies (such as using email to communicate with members) or other indicators of congregational resources (such as annual income or number of full-time staff).

In an article in the April, 2008 issue of the “American Sociological Review,” Paul DiMaggio and Bart Bonikowski document a substantial race difference in internet use. According to a 2001 survey, 72 percent of whites compared to only 53 percent of blacks reported using the internet. The race difference was even larger when people were asked about connecting to the internet from their homes: 59 percent for whites, 36 percent for blacks. The gap is striking. A majority of whites used the internet from home while nearly two-thirds of African Americans did not.

The digital divide between white and African American individuals partly reflects income and education differences, just as the digital divide between white and black churches partly reflects resource differences. But I suspect that black churches also lag behind white churches in website creation because black church leaders know that African Americans are less connected to the internet, so developing a church website is a lower priority investment than it is for white churches. If only a minority of the people you would most like to reach use the internet, why spend time and money to develop a church presence on the web?

Internet use surely has increased for both whites and blacks since 2001, and perhaps the digital divide among whites and African Americans has shrunk. If so, the digital divide between black and white churches also should shrink in the coming years. As with so many other areas of congregational life, what is going on in churches—in this case, a race difference in technology use—often mirrors what is going on in society.

Many thanks to Terri Dean for inspiring this closer look at race and technology in America’s churches.