Penny Edgell: The church as source of emotional support 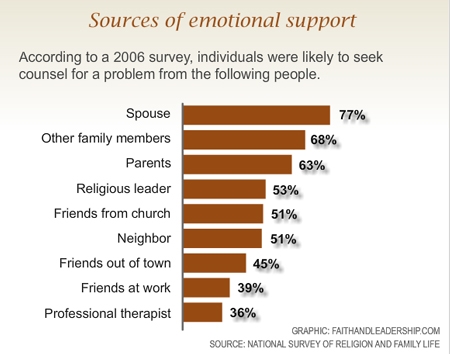 The first of two posts on where people turn for emotional support. Penny Edgell will break down the graph above in more detail next Wednesday.

Robert Putnam, the influential political scientist, has argued that religion undergirds the well-being of individuals and promotes healthy, strong communities, because it provides “social capital” -- relationships of trust and care-taking. Religious capital can be either bridging capital, which links individuals to others who are socially (racially, economically, ideologically) dissimilar, and bridging between the world of the congregation and the larger social context. Or it can be bonding capital, which primarily builds relationships of trust within the congregation among those who are probably very similar in terms of race, education, and income.

The consensus view is that churches in general are very good at providing bonding capital, and vary in their capacity to provide the more rare bridging capital. In my experience, this echoes the view of many pastors and religious leaders about the local congregation. It is good at taking care of its members, at fostering intimacy and fellow-feeling and community, but it must be prodded to reach beyond its own members.

Working with Eric Tranby and Darin Mather, graduate students at the University of Minnesota, I set out to understand the factors that influence one’s ability to find close, emotionally supportive connections in the local congregation. We drew on data from the National Survey of Religion and Family Life, a 2400 person, national, random-digit-dial telephone survey conducted in 2006. We asked people to identify all the people that they would be likely to turn to if they had a problem that was bothering them. The graph above shows what we found:

Clearly, churches are an emotionally supportive environment for many who encounter them, and the most significant source of emotional support besides family ties.