Roger Parrott: An unexamined idea is always a bad idea

The second of two posts on how sin, selfishness, or stupidity make leaders want to shield new ideas from the light of day. And what to do about it. 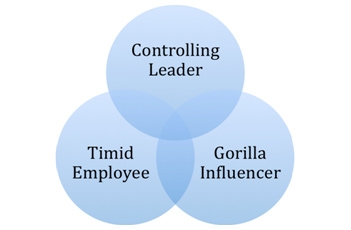 An unexamined idea is always a bad idea. If your understanding of idea assessment goes no deeper than this baseline concept, you’ll be far ahead of most leaders. You would think that leaders would want to systematically squeeze the best out of every concept, but it is amazing how often they go rushing ahead with an idea, enshrouding and protecting it from the bright light of careful evaluation.

The appraisal of an idea is often shielded from light because of three large spheres that, organizationally, can cause a total eclipse of the sun. As these circles overlap and block the light, the outlook for good decision-making becomes especially bleak.

Too often because of position, ego, selfishness, compulsion, inexperience, or commitment to the concept, leaders rush to implement a new initiative before it can be modified or criticized. The idea then does not have an opportunity to be improved through the perspectives and insights of others, or evaluated in the detail and distance that comes when the idea is separated from the possessiveness of the initiator.

Leaders who are sensitive about being appreciated for bringing “value added” results to the ministry are especially vulnerable to a pattern that keeps good ideas in the dark until they are ready to be unveiled to jaw-dropping thankfulness and thunderous applause. Their thinking goes, “Because my worth as a leader is measured by what I can bring to this ministry, then I must single-handedly find ways to develop the ideas which others are unable to see.”

That is not leadership, but arrogance.

A small Christian college was thankful to have one of the top business leaders in the world on their board of trustees -- a catch normally reserved for the wealthy name-brand institutions. To have such expertise, influence, and strength in a single board member is something most schools only dream about. But after the intrigue of celebrity wore off, the president and board knew they had made a gigantic mistake.

Yes, they had a person of enormous stature in their midst, but that was just the problem. A gorilla was in the room. When the mammoth personality spoke, not only did everyone listen, but also no one would dare disagree.

If there are large power differential between a “gorilla” influencer and everyone else, their presence can block out all the light that could have shined on ideas. The focus will shift from the careful examination of ideas, to the staff and other board members wanting to look good in front of that powerful person.

It is not just superstar board members that can be gorilla influencers. Anyone who is abrasively judgmental, comes on too strong, monopolizes the discussion, has a condescending spirit, or even someone who has served so long that they can’t be questioned create these dynamics for a limited environment that darkens ideas from the light of critique.

Far too many ministries have limited their effectiveness because those around the water cooler were afraid to participate in a free exchange about an initiative for fear of offending the one promoting the idea. Employees knew what to do to improve a concept, and talked about it among themselves, but the climate of the ministry was such that they understood open dialogue about ideas was unwelcome by their leaders.

If we are to use effectively the creative insights the Lord gives to each person in our midst, we must always be committed to openness, trust, and accountability so that ideas will be fully evaluated, criticized, and hopefully improved. Leaders and employees must hold each other accountable to ensure a spirit of openness that puts ideas fully in the light of day. And those closest to the problem, usually can develop some of the best solutions when encouraged to think and speak freely.

These three blockers of the light are more than mere personality idiosyncrasies. They underscore deeply rooted organizational dysfunctions that not only tolerate these distorted relationships but allow them to thrive. If the light of scrutiny is not brightly shining on your ideas, a dramatic change is needed -- from night to day, or as eloquently laid out in Ecclesiastes 2:13, "Wisdom is better than foolishness, just as light is better than darkness.”

Leaders must deliberately and sometimes painfully break these crippling spheres of darkness to achieve what is best for their ministry and God’s purpose.

Roger Parrott is President of Belhaven University in Jackson, Mississippi. He is the author of The Longview: Lasting Strategies for Rising Leaders (David C. Cook). The first post in this two-part series is here.

What would you say for a PayDay bar? A lighthearted exercise using peanut-encrusted candy as a reward is remarkably effective in helping people speak more honestly in public, writes a human resources specialist.