Skip to main content
How should Christian leaders respond to a pandemic? What is the church's role during the global coronavirus outbreak? New offerings and resources from the Faith & Leadership archives can help in these difficult times. »
TechnologyTheological Reflection

Deanna Thompson: From its earliest incarnations, the body of Christ has been a virtual body

Today’s digital networks have an ancient precedent: the apostle Paul led fledgling communities through letters -- showing that even in its earliest days, the church was not dependent on physical presence. 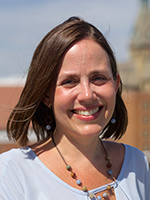 To be the body of Christ as envisioned by the apostle Paul is to be a community devoted to its weakest members (1 Corinthians 12:23). And to embody Paul’s vision for the church seems to require a physical presence with one another, especially with those who are going through tough times.

Having been in the position of “weakest member of the body” myself, with a stage IV breast cancer diagnosis, I can testify to the power of the actual physical presence of others during the worst of times. My family and I had so many concrete, physical needs that were met by members of the body of Christ.

But wait. If we stop and think about it, we realize that Paul himself was only rarely physically present with the communities he referred to as the body of Christ.

Though he developed deep connections with churches scattered across the Mediterranean, he was with them only on very occasional visits.

Even in its earliest incarnations, the body of Christ was a virtual body. Paul’s connections with the far-flung congregations were maintained primarily through letters. Pastor, professor and writer Jason Byassee has offered this intriguing view of Paul’s relationship with the churches he led:

Paul so often longs to be with the congregations from whom he is absent in the body. But notice what he doesn’t do: he doesn’t wait to offer them his words until he can be with them. He sends them letters. Letters meant to be read corporately, perhaps even to lead to worship or be part of it. Such letters allow him to engage personally without being present personally.

Paul’s connections with members of the body of Christ were nurtured mostly through the virtual form of communication most popular during his time. As Byassee suggests, Paul’s virtual presence via letters was in some ways, for both Paul and the community, a poor substitute for physical presence. Paul was their pastor and their teacher, yet his guidance was often very slow to arrive.

At the same time, the letters allowed Paul to pastor, teach and guide multiple church communities at once. The deep ties he maintained with these fledgling church communities is evident in his expressions of affection for them (Philippians 1:3), as well as in the comfort he found knowing that the community held him in their heart during his time of imprisonment (1:7).

Paul’s letters demonstrate that virtual connections with one another -- even during the most challenging times of our lives -- can be real, meaningful, even transformative.

Since being diagnosed with cancer, I’ve become aware of the 21st-century version of the virtual body of Christ that exists beyond the local church, in cyberspace.

When a malicious cancer forces you to resign from your life and confines you to your home through a forever Minnesota winter, virtual communication suddenly rises in importance. The CaringBridge website my brother set up for me quickly became the virtual hands and feet of Christ, enveloping me in a network of support that has sustained me and my family as we attempt to live with this maliciousness.

Connections made virtually, through digital technology, have led to material gifts of support, like rides to appointments and food on our table.

One of the great tasks before the church today is to think in boundary-stretching ways about how we might better incarnate the body of Christ. Theologian Guillermo Hansen has suggested that whether it is the global explosion of Pentecostal churches or the multiplication of “irreverent” forms of church emerging in pubs, coffee shops and even yurts, they are all giving expression to the “new ways in which the body of Christ is networked, loosening institutional corsets, giving room to the living gospel.” Hansen asserts that the body of Christ “is really the expression of a swarm without a ‘center,’ for Christ is mediated by a decentered and decentering network of charismata. The network, the body, is the center.”

I propose stretching Hansen’s notion of networks to include digital and social media networks. Church networks are expanding virtually in even more radically decentered ways throughout cyberspace.

The digital revolution is not without very real challenges. But as members of the body of Christ, it is incumbent upon us to begin to see our professed commitment to catholicity in new ways, and by so doing, to make more room for Christ’s healing presence in a world so desperately in need of it.

Deanna Thompson: I thought digital presence was a poor substitute for embodied presence. Then I got cancer.

Her experience with serious illness convinced a theologian that the virtual body of Christ can make a real difference in a hurting world.