The film adaption of “Blue Like Jazz” portrays a messier Christianity than its counterparts in the world of “Christian film.”

The film “Blue Like Jazz” premieres nationwide this week, a film based on the “New York Times” bestselling memoir by Donald Miller 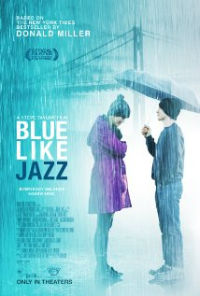 . True to the spirit of the book, which is subtitled, “Nonreligious Thoughts on Christian Spirituality,” the film includes swear words, drinking, a lesbian character and is open about hypocrisy found in the Christian church. The adaptation is fun, poignant and telling about an “anti-Christian,” Christian sensibility within the religious landscape, making it a new type of “Christian film.”

Don Miller is one of the most prominent representatives of this messier, modern Christianity. He embraces an open and more humanistic orientation toward being a follower of Jesus by avoiding a distant, “holier-than-thou” stance and relativizing the practices of the contemporary church.

When the book “Blue Like Jazz” appeared in 2003, many conservative Christian bookstores banned it from their shelves. The book shunned a straight-laced image of the faith and avoided more strident remarks on the evils of the world. Miller self-consciously refused to idealize conversion or discipleship, and conveyed stories that were far from the sentimental Sunday School portraits that get the “family-friendly” stamp. Conservative Christians concluded the book did not represent orthodox Christian theology and seemed to espouse a more liberal political agenda.

So six years later, with the arrival of the film -- featuring a lead character who says, “I’m ashamed of Jesus” -- it’s not surprising that tensions have emerged within conservative Christianity on whether this is a “Christian” film or not.

As I explored in “Hollywood Faith,” some filmmakers believe “Christian” film should only be made by Christians and for explicitly Christian purposes. Within the world of anti-Hollywood filmmaking, only Christian films that adhere to a fairly tight orthodoxy and portray a wholesome lifestyle are worth supporting. Should young children see it? Does it represent a “biblical” understanding of truth? Will “non-believers” be influenced toward the faith? The bottom line under these questions is whether conservative churches will endorse the film and whether Christian retailers will eventually sell it.

The result for “Christian” filmmakers is a struggle to attract the same financing and talent as major Hollywood studios. With low budgets and a tight ideology, “Christian” films have gotten a reputation for being sloppy, or worse, “cheesy” -- more interested in spouting one dimensional propaganda instead of telling a good story.

But unlike films like “Fireproof ” or “Courageous” which seek to encourage the faithful, “Blue Like Jazz” evades the recent genre of “Christian” film -- to the great satisfaction of Miller and director Steve Taylor. Although it’s received criticism from the “Christian” film realm (Rebecca Cusey said there is a virtual “Christian fatwa” against it), Paul O’Donnell suggests the film allows for a more nuanced understanding of evangelicalism, one conversant with secularism but lacking a morally superior tone. The film addresses spiritual struggles with an empathy to a viewer caught in the complicated, cosmopolitan and fiercely egoistic society in which we live.

Miller and Taylor orient the film this way in hopes it might achieve a different type of status: acceptance by mainstream audiences. “Movies about the faith struggle that millions of Americans deal with don’t have to be cheesy [and] can compete with other films at the box office,” Miller said. Resisting a fundamentalist segregation, Miller wants to attract people regardless of their faith commitments. He even promoted the film at festivals like SXSW in Austin, Texas, in order to find them.

Under the filmmakers’ strategy is a guiding belief that whoever controls the media controls the culture. For them, the entertainment industry is crucial to engaging American culture because movies are considered to be one of the most important mediums for shaping values in society. In this way, the makers of “Blue Like Jazz” take their cue more from producers like Ralph Winter (“Star Trek,” “X-Men,” “Fantastic Four,” “Planet of the Apes”) than say, Kirk Cameron.

Is the film merely Miller’s personal story put on the screen? Likely not. So many people resonate with Miller and his story that the film may well be capturing a more recent type of religious orientation within evangelical Christianity today, one his film legitimates and that threatens some conservatives.

But the ability to portray this “anti-Christian,” Christianity could spur the production of even more creative work that puts religion and social change into a broader conversation.