An analysis of Jesus’ social network helps us better understand and imitate his relationships with the marginalized, says a professor of religion and sociology.

A fundamental relational tension animates church life. God calls God’s followers to love and serve all people, regardless of any differences, and to see all as bearers of God’s image. And yet people tend to build friendships with those who are similar -- in socioeconomic status, in race and ethnicity, in theological and political views.

Though difficult, breaking homogeneity in the church is necessary, because of Jesus’ own ministry. Many Christians know and understand that Jesus often interacted with marginalized people. Stories in the Gospels show him healing the sick, reaching out to the poor, and crossing boundaries of gender and ethnicity.

As a researcher of religion and sociology, I wanted to explore more deeply how Jesus interacted with people in the Gospels and to reflect on what that tells us about how to construct our own communities. Using social network analysis, I discovered that Jesus’ connection with the stigmatized was unique, both in the number of relationships he had with them and in how few they had with other groups in his social network.

I was surprised to find just how many stigmatized people were in Jesus’ social network. By visualizing Jesus’ network of interactions, I saw clearly that he had mostly positive relationships with the stigmatized and that he connected with them in a way that other groups in his network did not.

For this study, I defined the actors as individuals who interacted with Jesus and the ties as the relationships between people. Relationships included anything from direct contact (Jesus’ calling Matthew) to a brief mention (Jesus’ calling Herod a fox). 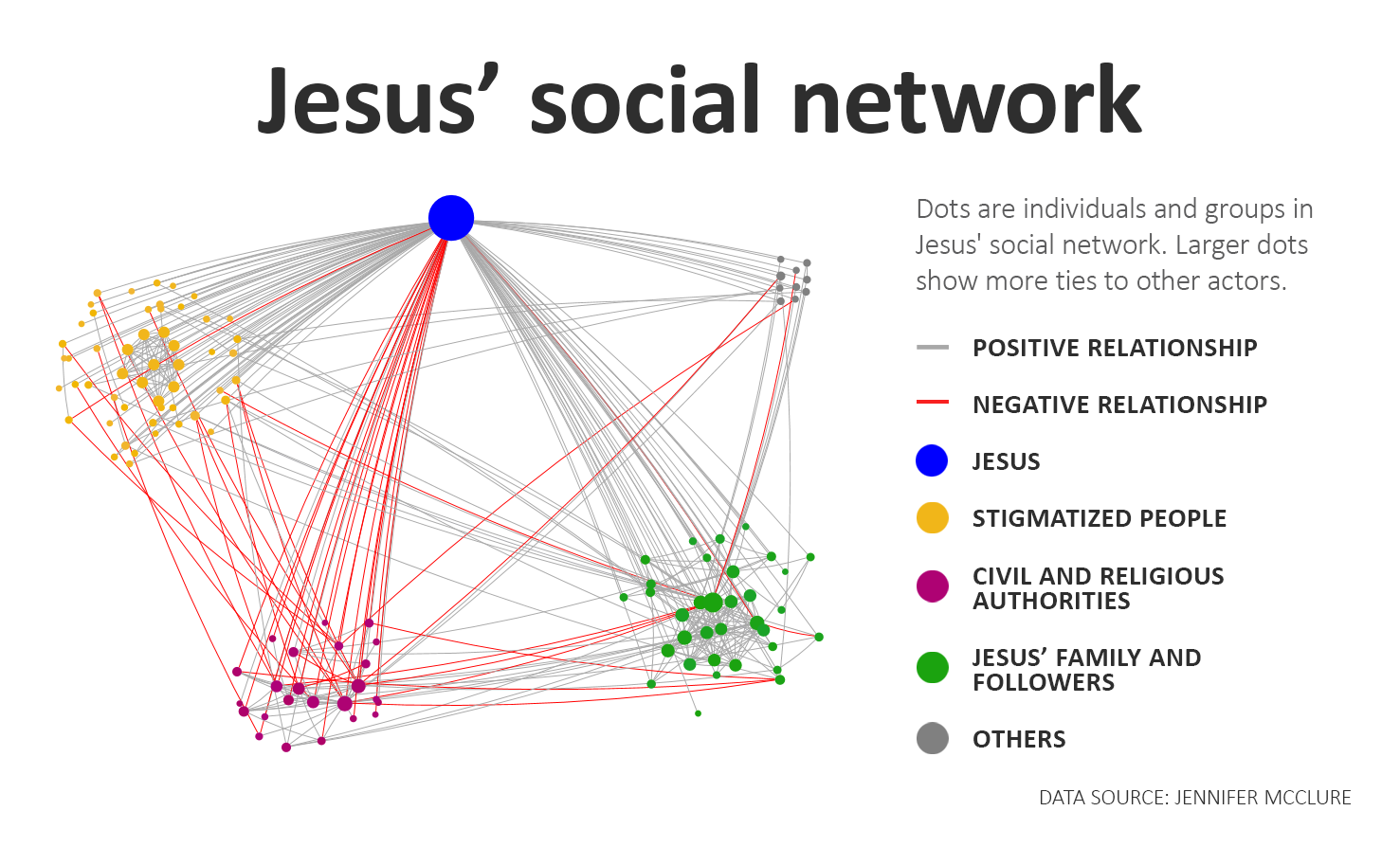 I classified Jesus’ social network into the following groups: stigmatized people, civil and religious authorities, Jesus’ family and followers, and others who didn’t fit into those categories.

I was surprised to find that stigmatized people made up more than 40% of Jesus’ social network, more than any other group. Jesus had relationships with 52 stigmatized people, 24 civil and religious authorities, 34 family and followers, and 10 in the “other” category.

The sources of stigmatization in the Gospels came from many directions. Some people were stigmatized because of sickness, disability or demon possession, others because of criminal activity, personal wrongdoing or socially frowned upon occupations (such as collecting taxes and prostitution). Still others were stigmatized because of non-Jewish ethnicity. Whatever the factor, stigmatized people were often seen as objectionable and less than fully human, and they were frequently avoided and excluded. But Jesus did not see or interact with them in these marginalizing ways.

Your relationships show your priorities, and the network of Jesus’ relationships makes clear the example his disciples are to follow. What would an illustration of your own social network look like? Would it look like Jesus’?