Skip to main content
How can Christian leaders faithfully navigate politics? This article is part of a collection of Faith & Leadership articles, essays, excerpts and other content »
Christian LeadershipPastoral leadershipCongregations

The author and activist tells how the religious right monopolized public faith and family values, and how Christians can change the conversation.

A signed picture of Republican Sen. Strom Thurmond hides behind the portrait of activist icon Ann Atwater in Jonathan Wilson-Hartgrove’s office. Thurmond famously filibustered for over 24 hours against the passage of a civil rights act; Atwater was a pioneer in school desegregation. Both were Wilson-Hartgrove’s mentors, albeit at very different times.

In his forthcoming book, “Revolution of Values,” to be released on December 3, 2019, Wilson-Hartgrove remembers arriving on Capitol Hill in the 1990s, a young Christian excited to serve as Thurmond’s page. The first thing Thurmond did was warn him about black people in Washington, D.C.

“I no doubt was racist, and racism had been part of the air that I breathed,” Wilson-Hartgrove said. “But I also realized that, hold on, this sort of blanket description of black people is dangerous.”

As Wilson-Hartgrove sat in meetings, more cracks opened in his belief that he was working in the government to defend biblical values. He began to see contradictions between the Bible and the supposed “biblical values” of his Republican Party. 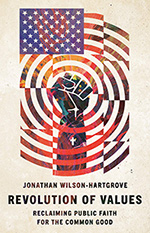 This transformation is the focus of “Revolution of Values.” Wilson-Hartgrove tells the history of how the religious right came to dominate faith in the public sphere and outlines how to read the Bible differently to promote Christian civic engagement that works for the common good.

He spoke with Faith & Leadership’s Chris Karnadi about the book, how to think about Trump voters’ faith and how to reread the Bible. The following is an edited transcript.

Faith & Leadership: You identify a personal journey throughout the book -- namely, that the religious right was courting you as a white man. Can you talk about that?

Jonathan Wilson-Hartgrove: Like everyone, I thought the world I grew up in was just “normal.” It was the only world there was in my imagination. And it took looking back on it to realize how directly not only I as an individual but my whole community was courted by this very focused effort to mobilize conservative white Christianity in service of a political agenda. But as I was growing up in it, earnestly trying to do all that I could to be a faithful Christian and make a difference in the world, it really did seem, growing up in the early years of the religious right’s organizing, that the best thing I could do would be to be a politician -- right? -- because that’s what was being celebrated.

But I did get quite involved in the leadership development and educational opportunities that were available to young, ambitious people wanting to climb that ladder. And then -- this is the most important thing, I would say -- I began to see the internal contradictions and tensions between the goals of that kind of organizing and what sincere and loving people had taught me about the Bible.

I met the Rev. William Barber and a tradition and a movement of people who understood biblical values very differently. So I do not believe, as a late-teens/early-20s person who’d grown up in that world, that I could have thought my way out. I really do believe I was loved into another way of interpreting the Bible and living it out, and for that I’m grateful.

We had talked a lot about how it was important to be involved in government, but when we were actually engaged in government, what the Bible says about how people should govern wasn’t very front and center. So I think those were the things that began to make me realize I needed to go back and reread the Bible, which in many ways is what this book is about. I’ve tried to reread the Bible with those people who were directly impacted by the ways it was twisted.

You read the Bible with poor people. You read it with immigrants. You read it with women and with folks who have had to fight for their land to not be poisoned or for their country which was on the receiving end of America’s militarism. And in all those contexts, I think the Bible has real good news that I wasn’t seeing, as somebody who thought it was my job to take the “biblical principles” of conservative values and implement them through the power of government.

F&L: What are the historical roots of the values of the religious right?

JWH: So I wrote this book after I wrote a book that was much more about the role that race had played in influencing faith over the 400-year history of black folks being in the United States of America. And in the midst of researching that book, I came across this quote from Robert Lewis Dabney. He’s a Christian defender of slaveholding just before the Civil War, and he says, “We have to drive the abolitionists against the wall and force their position to assume an un-Christian label.”

And I realized that that has been the pattern of the religious form of backlash against moral movements in American history. And in terms of our current context, the values conversation has really been about a backlash against the civil rights and the women’s rights movements of the ’60s and early ’70s.

The use of the Bible as a moral authority to push back on a movement or a kind of organizing that has real moral weight, I think, is an important dynamic to recognize in American culture, and it helped me see that we wouldn’t have had a religious right if white Christians in particular had not been very scared of losing political power because of the Voting Rights Act and the second wave of feminism that got women more involved in public life.

So the birth of the religious right is very much tied to that reorganization that happens after the 1960s, when people who had been segregationists are looking for language for how they can maintain political power, and what they land on by the late ’70s is biblical values -- and specifically, tying that to a pro-life, pro-family movement.

F&L: You open the book on the U.S.-Mexico border, when you go with someone to reunite with her family in the river, and you describe the experience as a baptism. Why use this experience to set the tone and the frame of the book?

I was invited with other ministers to go down to the border. This was in the fall of 2017, so after the Trump administration had been ramping up ICE enforcement and using a lot of rhetoric that talked about a crisis on the border. But the people who were there in El Paso, Texas, wanted us to see that context and hear their long story of organizing in that context. They called it Hugs Not Walls, a chance for families to come from each side of the border and meet in the river and have a little reunion even though they can’t get the paperwork to go on one side or the other.

We went with a woman named Maria -- I tell this story in the book -- and she took us from the U.S. side to meet her husband, who had been deported by the Trump administration, and some sons who live in Mexico she hadn’t been able to see in several years, and I think I felt like it was a second baptism for me because it was a very concrete demonstration of someone who can read the Bible from this perspective of the ones who’d been marginalized, the ones who’d been hurt by the religious right’s values, inviting us to come and to see and to participate.

That’s what baptism is for me. We’re going to take you into the waters and unite you with your family that you didn’t know you had.

And that frames what I’m trying to do with this book. I’m trying to say that if you take the Bible seriously, read it with Maria, read it with everyone you meet in this book, and read this powerful, prophetic vision of a different kind of values. Because I think that’s what can bring about a revolution of values, a kind of reclaiming of the story that tells us who we are in the community that we’re part of in a way that makes it possible to imagine a long struggle to build a better culture for the common good.

F&L: What’s the call that you’re making to your readers, especially white readers, through this book?

And I teach and preach and minister among folks from all of those traditions and have written for folks from those traditions, and I know that a lot of those people are not entirely comfortable with the way things are or with the decisions they made. And yet often, for them, for many white Christians, as uncomfortable as they may feel, the biggest challenge to doing something else is that they see any of the available alternatives as un-Christian -- as anti-God, even.

And in fact, it’s not Trump voters’ sincere commitment to their faith that’s the problem. The problem is that millions and millions of dollars were spent over 40 years to convince them that their sincere commitment to Jesus means that they should vote for a Republican, no matter how extreme that Republican Party may become on immigration and denying climate change and growing the military budget despite having to cut all sorts of other things. So that’s what I want to communicate, that their faith does matter.

I’m not in any way pretending that Franklin Graham and Jerry Falwell [Jr.] and Robert Jeffress, those folks, are going to go away, but why should they get to define what Christianity is?