Skip to main content
How can the church participate in antiracism work? This article is part of a collection of Faith & Leadership articles, essays, excerpts and other content »
JusticeAnti-racismChristian LeadershipInstitutional leadership

The author and speaker addresses the theology and history that informed the exploration of the New World -- and what it means to repent of America’s unjust foundation.

In the early 2000s, Mark Charles moved with his family to live in a traditional hogan, a single-room home with dirt floors and log walls, among his people in the Navajo Nation. Trading the density of Denver, Colorado, for the wide-open space of a sheep camp some 6 miles from the nearest paved road, Charles and his family were isolated.

“It literally felt like we dropped off the face of the earth,” Charles said.

During this time, he came across the book “Pagans in the Promised Land,” by Steven Newcomb, which describes the effect of the Doctrine of Discovery on indigenous people. As he wrestled with the modern-day marginalization in the Navajo Nation, Charles saw more clearly than ever the historical trauma of viewing the Americas as the New World.

It’s to this disturbing legacy that Charles speaks in his book “Unsettling Truths,” co-written with Soong-Chan Rah. The project is a reckoning with the history and theology of the Doctrine of Discovery and a call for repentance for all living on stolen land.

Charles is an activist, speaker and former pastor. He has served as a correspondent and columnist for Native News Online and now lives in Washington, D.C.

He spoke about the book and what true repentance for stolen land looks like with Faith & Leadership’s Chris Karnadi. The following is an edited transcript.

Faith & Leadership: Can you explain the Doctrine of Discovery and its lasting impact?

Mark Charles: The Doctrine of Discovery is a series of papal bulls, or edicts, of the Catholic Church. The first one, from 1452, is titled Dum Diversas, written by Pope Nicholas V. It authorized the Portuguese to “invade, search out, capture, vanquish, and subdue all Saracens and pagans, … reduce their persons to perpetual slavery, and … convert them to … their use and profit” [as detailed in the follow-up Romanus Pontifex of 1455].

It’s the church in Europe saying to the nations of Europe, “Wherever you go, whatever land you find not ruled by white European Christian rulers, those people are subhuman, and their land is yours to take.”

So this was adopted by European nations both [in efforts] in Africa to colonize and enslave people and by Columbus to land in this “New World,” which is already inhabited by millions, and claim to discover it. You cannot discover lands already inhabited. That’s called stealing. The fact that we refer to what Columbus did as “discovery” reveals the implicit racial bias, which is that native people, people of color, aren’t fully human.

So then this doctrine gets imbedded into the foundation of the country. The Declaration of Independence, which begins with the words “We hold these truths to be self-evident, that all men are created equal,” refers to natives as “merciless Indian Savages” 30 lines later, making it clear that our Founding Fathers used “all men” with a very narrow definition of who was actually human.

In 1823, the Doctrine of Discovery gets referenced by John Marshall in the Supreme Court in Johnson v. McIntosh and basically states that the principle for land titles is discovery. According to the doctrine, natives were here first, but because we’re savages, we only have the right of occupancy to the land, while Europeans have the right of discovery, and therefore they’re the true title holders.

So that case, along with a few others, creates the legal precedent for land titles. And that precedent and the Doctrine of Discovery are referenced specifically by the Supreme Court in rulings in 1954, 1985 and, most recently, 2005.

The challenging part -- and I actually warn people to think very carefully before they repudiate the Doctrine of Discovery -- is that it’s not just a theological action. The Doctrine of Discovery has become a legal instrument. And it’s the instrument that props up land titles. So if you are going to repudiate this doctrine but are not willing to give up your land, whose title is based on this doctrine, then you probably shouldn’t repudiate it.

At Standing Rock -- and this story is in the book -- there was a large public gathering of Christians who repudiated the Doctrine of Discovery. And I was there a few weeks later and asked the people who organized it if they got any land back.

Well, did they commit that they would not defend themselves in court if they were sued in court for the land?

No, they didn’t do that either.

F&L: How do you think reading this book will push people toward that real repentance?

MC: The book started out a long time ago when Soong-Chan and I met through some projects we were doing together. He was finishing up his book called “Prophetic Lament,” and I was talking about the Doctrine of Discovery. We had a common theme of lament. 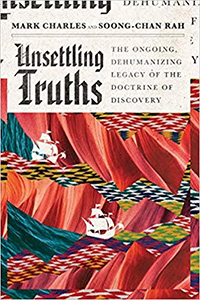 I was calling the church into a season of lament regarding our history with both writing and being complicit in this doctrine. And he was talking about lament from his book. So we started to write. And then the 2016 election happened, and we had to sit down and rethink some of our theses. The book took on a bit more of a rebuking tone than even a call to lament. It was still a call to lament, but it was even more of a rebuke.

I feel very good about the book right now. I feel it’s a strong book and a very honest book. I think it’s hopeful, not in this warm-and-fuzzy hopeful way, but in the sense that I think it helps the church open its eyes to some of what we believed in the past and how that has led to the challenges we’re facing in the present -- and then what we need to do to address those things.

F&L: Thank you for sharing those thoughts. They’ve challenged me and made me uncomfortable in the best way.

MC: That’s our goal. Trust me, both Soong-Chan and I felt very uncomfortable even as we were writing it. One of the reasons it took so long to write is because there were several points where I realized I was believing some of these same lies I’m exposing.

I had to pause, even sometimes for months at a time, and just lament what I was learning and allow that to shift my paradigm some more as we continue to understand this history and move forward.

The stories of the Nishnaabeg people aren’t just tales; they are an embodied way of teaching, learning and living, says a Canadian artist, writer and scholar.