If your church cares about its youth growing up in the faith, it'll hire full-time youth ministers. 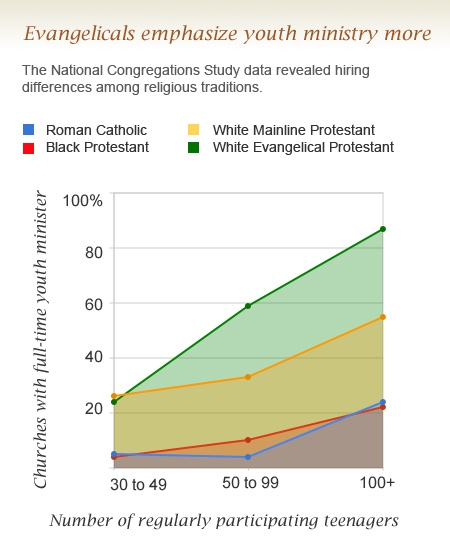 Evangelicals care more than mainline Protestants about keeping their young people in the faith.  This is the striking conclusion James Wellman reaches in his fascinating book, “Evangelical vs. Liberal: The Clash of Christian Cultures in the Pacific Northwest” (Oxford). Based on observations, interviews, and focus group discussions with people from 24 evangelical and 10 mainline churches, all vital churches with stable or growing memberships, this lively book compares these two religious cultures in many ways. How people think about youth and youth ministry emerges as a key difference: “For evangelicals, if children and youth are not enjoying church, it is the church’s fault and evangelical parents either find a new church or try to improve their youth ministry. For liberals, the tendency is the reverse; if youth do not find church interesting it is their problem. Evangelicals are simply more interested and invested in reproducing the faith in their children and youth and their churches reflect this priority.”

(A technical note: The numbers in this graph give the percentage of churches with between 1 and 6 full-time ministerial staff who employ a full-time youth minister. Churches with 7 or more full-time staff are not included because the NCS didn’t ask for job titles if there were 7 or more staff).

But youth groups, teen choirs, and teen-led worship services are inexpensive compared to hiring a full-time youth minister, and having a full-time youth minister surely enhances the quantity and quality of a church’s teen programming. It is difficult to know for sure, but evangelicals’ deeper concern to reproduce the faith in their children probably leads to hiring more full-time youth ministers, which probably leads to keeping more youth in the church. Evangelical churches invest more than mainline churches in youth ministries, and it is difficult to avoid the conclusion that this investment difference reflects a difference in the priority placed on keeping young people in the church.

We are physical beings -- what if our ministries reflected that?

Physical labor and activity have been a boon to teens during the pandemic, leading a youth pastor to realize that the physical matters -- to us and to God.

Christian professionals and families partner to experiment with innovative approaches to youth formation in a socially distant environment.