How often do churches fight? Are some congregations perennially at odds? The National Congregations Study has some answers. 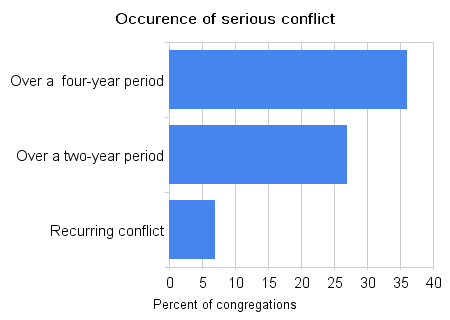 Everyone knows that congregations experience conflict, but how common is such conflict, especially serious conflict? Is there a lot or a little? It turns out that we get a different picture of the extent of congregational conflict depending on the time frame and depending on whether we focus on occasional or persistent conflict.

In 2006-07, but not in 1998, we also asked if there has been a conflict that led to the departure of a clergyperson or other leader. Nine percent said yes.

If you are surprised that the level of congregational conflict is the same today as it was in 1998, you might find it downright amazing that, according to Emory University historian E. Brooks Holifield, today’s level of congregational conflict is the same as it was in colonial times! Between 1680 and 1740, 28 percent of Congregationalist and Presbyterian ministers in New England and on Long Island “had serious trouble with their congregations,” and 8 percent had to resign (God’s Ambassadors, Eerdmans 2007, p. 87). These numbers are remarkably similar to the NCS numbers. Perhaps there is an unknown but fundamental law of nature behind this stability. The more things change . . .

There is analogy here to hospital beds and poverty. Most hospital stays are short, but a large percentage of hospital beds are occupied by the relatively few people who require long stays. Similarly, there are many more people who experience brief spells of poverty than who are persistently poor, but at any given time the persistently poor make up a disproportionate share of the poor population. And the needs and problems of those who require long hospital stays or who are persistently poor are different from the needs and problems of those who require only short stays or who experience a brief spell of poverty. Understanding these differences is part of the challenge of managing health care resources and developing effective anti-poverty policies.

Frankly planning for roadblocks is an advantage for pastors

Church leaders can remain focused on their goals by anticipating challenges, naming them, and preparing for them, writes a managing director of Leadership Education at Duke Divinity.

Leaders often find themselves targets of critique from those in the “cheap seats.” The best response is to show the kind of love that beckons the critics to self-examination, confession and repentance, writes a managing director at Leadership Education at Duke Divinity.

Leaders should work to ensure that their organization's narratives and values are made real within the organization as well as in the world, says the conflict transformation and mediation expert.