If there are more congregations hiring staff without seminary training, it's not because they devalue learning. It's because seminary-trained people are more expensive. 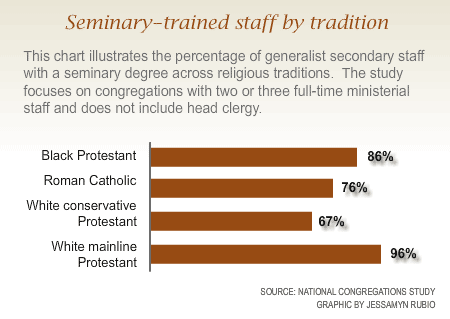 As I documented in an earlier post about the educational attainment of congregational leaders, the vast majority of head or sole clergy graduated from seminary, and, when it comes to full-time ministerial staff other than the lead person, only specialist ministers (youth ministers, music ministers, directors of religious education, and so on) tend not to be seminary graduates. The vast majority of generalist ministerial staff are seminary trained even when they are assistant or associate rather than head pastors.

The graph above documents denominational differences in this pattern. Generalist assistant and associate ministerial staff are somewhat less likely to be seminary graduates in white conservative and evangelical Protestant congregations than in any other Christian group. (As in the previous post on this subject, this analysis includes just congregations having 2 or 3 full-time ministerial staff. There are too few nonChristian congregations in the sample to provide a meaningful comparison on this subject.)

The lower prevalence of seminary graduates among generalist ministerial staff within conservative Protestantism surely reflects a longstanding disdain for seminary education among some Baptist and Pentecostal groups--a disdain rooted in social class differences and differential access to higher education--rather than a recent trend away from seminary education within these groups. Indeed, as I mentioned in the previous post on this subject, the long-term trend even among these groups is towards more rather than less seminary training, and today two-thirds of generalist secondary staff are seminary trained even within conservative Protestant congregations.

Putting together the observations reported in my two posts on this subject, I do not see evidence that people want religious leaders who are less rather than more well-educated, nor do I see evidence that people are growing disenchanted with seminary education for their congregational leaders. Seminary training remains the norm for generalist congregational leaders. This is less true within some religious groups, but there is nothing new about that. To speculate beyond what the data show, my hunch is that, if there are more congregations turning to leaders without seminary education, it is not because people value that education for their leaders less than before. It is because fewer congregations can afford the well-educated clergy they still would choose if they could.