Not surprisingly, abortion and homosexuality. More surprisingly, international aid and poverty. And few actually demonstrate over anything. 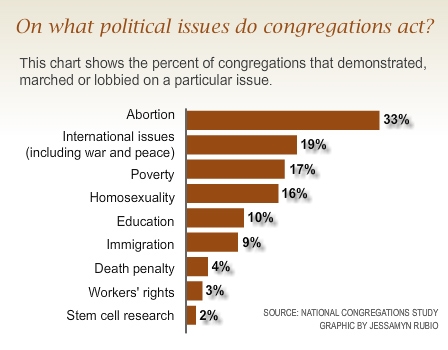 According to a recent news report by Yonat Shimron of the “Raleigh News and Observer,” William Barber, the African American clergyman who leads North Carolina’s NAACP, urged a meeting of ministers from mostly mainline churches to bring their congregations to a march that will call attention to the state’s unemployment crisis and protest the Wake County school board’s plan to end its diversity policy.

In the 2006-07 National Congregations Study, when a congregation reported that they lobbied elected officials or participated in a demonstration or march within the last year, we asked what issues they worked on. Their answers are revealing.

Perhaps unsurprisingly, abortion is by far the most common issue that marching or lobbying congregations marched or lobbied about. One in three of all congregations that engaged in these activities focused on abortion. Almost all of this activity was on the pro-life rather than the pro-choice side of the debate.

The rest of the list may be more surprising. International affairs is the second most common type of issue mentioned (perhaps because this survey was conducted during a wave of protest against the Iraq war), with poverty and homosexuality close behind. About two-thirds of church involvement on gay and lesbian issues opposes equal rights for gays and lesbians; about one third supports equal rights. Interestingly, recent religious attention to environmental issues has not yet led many churches to demonstrate or lobby. Fewer than 1% of lobbying or marching churches said they lobbied or marched about environmental issues.

So when an African American minister encourages liberal Protestant churches to march about education and poverty, he is emphasizing exactly the issues that, when these types of churches march, they are most likely to march about. And if he got more than 2% of these churches to show up for the march, he would have exceeded expectations for church participation in this sort of event.