The usual tools of leadership aren’t effective during times like the one the church finds itself in now -- those liminal seasons when the path forward isn’t clear, says the author of “How to Lead When You Don’t Know Where You’re Going.”

But in these liminal moments when the way forward is not clear, it’s important to pause and draw upon the practice of discernment rather than forge ahead with false confidence, says consultant and author Susan Beaumont, who addresses the quandary in her book “How to Lead When You Don’t Know Where You’re Going: Leading in a Liminal Season.”

“It’s a season in between times, when something has ended but a new thing is not yet ready to begin,” Beaumont said.

A former senior consultant with the Alban Institute, Beaumont has an MBA from Northwestern University and an M.Div. from McCormick Theological Seminary. She is also a graduate of the spiritual guidance program of the Shalem Institute for Spiritual Formation. 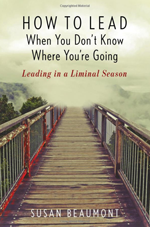 Beaumont spoke to Faith & Leadership’s Sally Hicks about helpful stances and practices for leaders who are struggling in a liminal season. The following is an edited transcript.

Faith & Leadership: What is liminality, and how does it apply to the church today?

Susan Beaumont: The simplest way to describe liminality is to say that it’s a threshold moment. Liminality is the in-between space when you are neither here nor there, and it’s a very rich time organizationally and institutionally for an organization to rediscover a lot about itself and to become highly creative.

The challenge of liminality is that because of the disorientation, it requires a fundamentally different kind of leadership stance than what we typically value as effective leadership.

Typically, we’re looking for people that have clarity of vision, who can stand where they are and tell you where they’re going, create action plans, overcome obstacles.

Liminality is about needing to stay in the space you’re in long enough to do the important work that needs to be done there. It’s often about failing people’s expectations as a leader, because it doesn’t look purposeful the way that other seasons of leadership do.

F&L: So what serves you well in another kind of situation actually fails you in a liminal season?

SB: That’s right. Because if we pretend that we have certainty about where we’re going, we begin to create action plans and we force forward movement. That creates a false sense of productivity. It can feel like you are making progress, but it doesn’t fundamentally impact the nature of liminality, the unknowing part of it.

All of that is futile, wasted energy, because the energy at this moment is to be in this space in a different kind of way that allows for this notion of communitas, for a new kind of community to emerge organically from within it.

The process of emergence, which is a very organic kind of thing, has to be tended carefully.

F&L: You note that God’s people have gone through periods of liminality since the beginning of time. Does knowing that make it easier for a person who is struggling now?

We can see that in the figure of Moses. We can see that in Job and Jonah, in Abraham and Sarah. Everybody is drawn out of, “I was this kind of person in this settled place, and then that identity undid itself and God took me to a new identity.”

Many of us will have ministries entirely defined by liminality, as Moses did.

If we can contextualize what we’re experiencing now in light of that instead of looking at this period of time as a “woe is us” period of time, we can come out of it with a deep sense of hopefulness and expectation about what God might be doing with us and the identity that we are being drawn toward.

This is not that somehow we have failed the church but that God is getting the church ready for a new time and we’re key players in it.

F&L: How do the leader and the followers tell the difference between stagnation or inertia and the discernment you’re describing?

SB: Inertia is the tendency to do nothing in response to stagnation -- sitting out a difficult season with a shoulder shrug and saying, “Oh well, there isn’t anything I can do to impact this.” That’s not what I am talking about here. I’m inviting leaders to adopt a new leadership stance and a different body of leadership work.

In liminal seasons, it is important to adopt a leadership stance of presence -- an orientation of openness, awe and wonder. This requires three fundamental shifts in our thinking: from knowing to unknowing, from advocating to attending and from striving to surrender. The book explains how to make these three shifts and what happens when you do.

Liminality also calls forth a different body of leadership work. We need to deepen group discernment practices, reshape institutional memory, clarify our purpose for this season and engage emergence. These practices will help us live into our new identity. We need to move beyond inertia, but we have to do it in savvy ways appropriate to the season we are in.

F&L: How does a leader ask those questions and elicit those deep answers?

SB: There are a lot of ways to come at deeper answers about the purposeful work that is ours to do in this season.

Certainly, there are some great surveys out there for a large congregational context, where we have to get information from a lot of people.

We can do demographic studies, which help us better understand things about who we are and how that relates to the demographics of the community we find ourselves in today. Those are typical parts of strategic planning that congregations have done in the past.

What feels different about this season is we have to ground that kind of work deeply in story-based narratives.

As a consultant, I love to use the tools of Appreciative Inquiry in a season like this to ask people to tell stories about their best moments in the congregation.

People come together in small groups to talk. Out of the center of storytelling and dialogue, really rich things begin to emerge around the most important values for the congregation, but also what’s new that’s bubbling up.

And then I think the key for a leader is to be able to attend to how that begins to emerge.

For example, in the book I talk about the church I call St. Mark’s Church that was a small, declining congregation located in a predominantly Muslim community.

They had traditionally stood for a place where people raised their children in the faith, and they were losing their center of that identity, because they just couldn’t find enough new people to attract -- until there was a moment in time when the pastor noted that within the community there was a need for interfaith dialogue.

For a variety of reasons, St. Mark’s was the right place to locate that conversation, and the congregation opened their building to serve as hosts and began to discover a whole new identity for itself: “The unique thing we can do in this community right now is be the center of interfaith dialogue and serve our neighbors who are not like us.”

They let go of thinking (“Our primary thing is to inculcate people in our tradition”) to [embrace] being (“We are hosts to a larger dialogue that’s happening here”).

They had always valued education. But when they started to understand that, taking that part of their core identity -- education -- and mixing it with what was changing in the context allowed them to discover a new purpose for this season.

F&L: Are there other methods or tools or approaches that you’d recommend to folks who want to engage in this?

SB: I lay out in the book my understanding of the difference between a deciding approach and a discerning approach. Most of our congregations have to blend both decision making and discernment.

I mean, we hit a point in the year when we have to pass a budget. We can’t sit in an openhanded stance indefinitely, because we need to figure out how much money we have to spend this year.

So there’s a period that we engage in intentional discernment and listening together, and then there’s a moment when we decide. And then we go back into discernment again.

Not every issue is a discernment issue. We don’t need to engage in discernment about where to paint the lines in the parking lot, but there are much bigger issues that we’re facing today where having an intentionality of process might take us someplace different.

What we gain by being neither quick nor efficient

Stepping away from everyday urgency, even in simple ways, can help us squeeze slowness back into our lives, writes a communications specialist with Leadership Education at Duke Divinity.

What are we rebuilding and why?

Congregations should see with new eyes as they re-envision ministries in a world reshaped by twin pandemics, writes the executive director of Leadership Education at Duke Divinity.

Reconsidering our relationship with time can move us from a mindset of mastery and control to one of openness, writes a communications specialist with Leadership Education at Duke Divinity.