Changing our interpretations of events -- the stories we tell ourselves -- can lead people to lasting change, says the author of the book “Redirect.”

Success is often more than talent and opportunity combined. It may also be influenced by the stories we tell ourselves about our lives, says social psychologist Timothy D. Wilson, the author of “Redirect: The Surprising New Science of Psychological Change.”

In the book, Wilson lays out his research-backed theory that success, happiness and self-esteem are often tied to personal narratives, and that altering -- or “redirecting” -- that narrative can be the key to lasting change.

“Some books suggest that just thinking something positive will make it happen, but it’s a little deeper than that,” Wilson said. “People really have to revise their specific thoughts in a way that leads to behavior change.”

Wilson is the Sherrell J. Aston Professor of Psychology at the University of Virginia, where he has earned accolades for his research and his teaching.

He spoke with Faith & Leadership about redirecting, and how it can be applied to leadership and organizational change. The following is an edited transcript.

Q: What is the concept of redirecting?

An awful lot of human behavior stems from the way we interpret the world and the narratives we tell. If we want to get people to improve their lives, one approach is to try to get them to edit these stories.

One way to do that, of course, is through psychotherapy. Psychotherapy is all about narrative changes to get people to view their lives differently and change the kinds of stories they tell themselves. Cognitive behavioral therapy is another approach that does that. 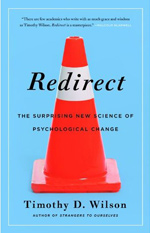 But social psychologists such as myself are trying to catch people before they need psychotherapy, where maybe they’re kind of at a narrative fork in the road.

Something’s happened to them that they’re unsure about. They could explain it one way, which perhaps is not beneficial, or another way, which would be much better for them in terms of motivating them to change.

We have developed interventions that try to redirect them down that healthier path.

Q: Could you explain a little bit about “story editing” and what the effect is?

In saying that people have stories and narratives, I don’t mean that we all sit down like novelists and write out a narrative. It’s more the implicit kinds of assumptions we make about ourselves and our place in the world.

In a study I did years ago, when I was a professor at Duke, we were struck by the fact that some students got caught in what seemed like a negative way of thinking about their academic performance. It would spiral downwards if they had an initial academic setback. They would see that as a sign that somehow they weren’t fit for college.

So we tried to catch people in the beginning of their first year to redirect those thoughts. We identified students who weren’t doing very well academically and were worried about it, and we brought them in.

They didn’t know this was an attempt to help them in any way. They just thought they were taking part in a psychology survey.

In our intervention group, we simply gave them some statistics indicating that many students do poorly at first but then improve their grades as the years go by. We reinforced that with some videotaped interviews of upperclass students who said things like, “Yeah, I didn’t do very well my first semester, but I’m doing just fine now.”

A control group of people did not get that message. But the students who got our redirect -- our story-editing -- message got better grades about a year later, and they also, to our surprise, were more likely to stay in college. There was a pretty high dropout rate among the people in the control group.

Our little 30-minute intervention seemed to succeed in keeping some people in college.

I think the reason a small tweak of people’s stories can have such long-term effects is that it’s self-sustaining. It may have made some students study a little harder for their next test or reduced their anxiety a little bit.

If that paid off, it reinforced the message and made them study harder for the next test. If you can just push them a little bit down the healthier road, that can sometimes be self-sustaining.

Q: How is this different from the power of positive thinking?

It’s not that the students in my study simply said, “Good grades, good grades” and that magically happened. They had to actually put it into action.

Q: In this story-editing process, how do friends and larger communities play a role?

We all grow up in a cultural and family context, and our stories and narratives are shaped by that. I suppose one could say that a big reason some families are healthier than others is that they’re promoting healthier stories.

But when it comes to change, I do think it has to be kind of self-initiated, and that we can’t just rely on others to do it for us.

Q: This book seems related to your earlier title, “Strangers to Ourselves: Discovering the Adaptive Unconscious.” Do you see a connection between the notion of narrative redirection and consciousness shaped by habits?

Both books talk about the importance of the self-concept, how it is not entirely accessible to us through introspection, and that the way we view the world can be unconscious to a large degree.

There’s good research evidence to show that if we can just habitually act in a certain way, often the self-concept follows that, not precedes it.

Q: Could you explain your idea from “Strangers to Ourselves” about how consciousness is shaped by habits and activities?

There is some very famous research on self-perception that says part of our mind is keeping track of what we do and the context in which we do it and drawing inferences about ourselves.

Much in the same way as we observe other people and try to guess what they’re like, we are observing ourselves and trying to guess what we’re like. So if, for example, we find ourselves frequently engaging in volunteer activity and no one is making us do it, we’re likely to conclude that we are caring and helpful people.

It’s not like we go around with a little notepad and write, “Volunteered today -- must be helpful.” It’s a much more subtle updating of our self-concept.

That’s why the “do good, be good” principle and getting into patterns of good behavior are so important.

Q: Is there any particular lesson in your books for leading organizational change?

Ask the question, “What is the story of this organization; what sort of narratives do we seem to be promoting?” If it’s one that you want to change, try changing people’s behaviors first.

Q: As a leader, can you require people to change their internal stories -- or do you think that’s more of an individual practice?

If people feel they’re being coerced into doing it, it can backfire. If they really feel it is a mandate from on high, they won’t change as a result. So it has to be encouraged but not required.

There’s a chapter in my book “Redirect” on child rearing. I think this is an important parenting lesson: one should avoid being too heavy-handed, with both praise and punishment. The idea is to shape our kids in ways where they also feel autonomous and that they have some choice in the matter.

I think the same lesson can occur in organizations, that modeling and shaping behavior is much better than mandating it.

Q: Do you think people who are successful in leadership are better at story editing?

There are certain personality traits that all leaders share, but it seems to be more situation-specific. In some contexts, one type of leader might be better than another.

But awareness of one’s own limitations and a certain amount of self-knowledge and the ability to read other people have to be some of the most important traits.

Q: What is your key insight into the way human beings behave?

I would say that it is all about seeing the world through other people’s eyes and understanding that their view of reality may be different from mine. To come to some shared understanding of the world, our stories have to meet halfway.

Often, what we’re disagreeing about is more a matter of how we’re interpreting things rather than disagreeing on facts. This has wide applications to conflict resolution and all sorts of things.

Q: Is talent or some ineffable quality that individuals possess important, or is what one actually does really the most important thing?

There’s research by a social psychologist named Carol Dweck that says that people tend to have one of two theories about their own abilities.

One is that talent is a fixed thing that you either have or you don’t, and so you’re good at something or you’re not. The other is that you have a certain amount of talent that you’re born with, but you can get better with practice.

Carol Dweck has shown in lots of different studies that the latter view is a much better one.

The problem with believing that you have a fixed amount of a talent is that the first time you do poorly, as everyone does, it leads to giving up. But if you have the theory that intelligence, for example, is like a muscle that gets stronger with practice, then the message you take from failure is “I didn’t try hard enough” or “I need to practice more.”

Almost everything gets better with practice, and that’s just a much healthier way of looking at things.