Martin Luther reminds Christian leaders of their most basic task -- to embody the truth that God is known in the life, death and resurrection of Jesus.

In the spring of 1518, as storm clouds of controversy gathered on Germany’s horizon, Martin Luther had the chance to address an order of Augustinians, his fellow brothers in the faith, in Heidelberg. They’d heard rumblings of what Luther was about, the missteps he’d taken, the debates he’d stirred up. But now they had a chance to hear about it from the troublemaker himself. 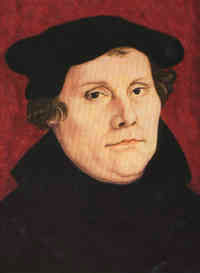 What was the fuss about?

Luther was challenging the popular scholastic approach to theology that had become, he felt, drastically misshapen. Rather than draw a straight line from human ingenuity and resourcefulness to describe what God was like, Luther said that God was to be found in weakness, brokenness and suffering: “Now it is not sufficient for anyone, and it does him no good to recognize God in his glory and majesty, unless he recognizes him in the humility and shame of the cross.”

Augustine was right, all those years ago, Luther said in effect. The path to knowing God isn’t a ladder for gifted humans to climb. It’s actually the reverse: God comes to us, shares our plight and lifts us from it.

If all that sounds a bit too abstract and academic, let me tell you a story that captures the main point perfectly.

My goddaughter Callie was recently reading a Bible picture book with her mom. A little over two years old, Callie interrupted at one point: “Mommy, what does God look like?”

Now, it would’ve been easy to give a quick answer. Flip over to the drawing of the throne room in Isaiah 6 or Revelation 4. Or turn to the story in Genesis 18 of Abraham’s angelic visitors. “See, there’s a picture of God,” my friend Megan could have said to her daughter, pointing to the cartoonish rendering of the old man with the white beard.

But she did something different. Closing the picture book, she said, “Let me tell you a story.” And she described Jesus’ carrying his cross, climbing the mountain of Golgotha, praying for forgiveness for those who nailed him to the cross, and crying out with a loud voice as he died for those who didn’t -- and don’t -- deserve it.

And that, to me, seems to be the most basic task of Christian leadership -- to re-enact the truth that our God is known in the life, death and resurrection of Jesus. In word and deed, in the preached word and the visible word of the sacraments, in churches and organizations, in soup kitchens and coffee shops, and to people who ask, “What is God like?” we say, “Let me tell you about a day in Jerusalem, 2,000 years ago….”

As Luther said, “true theology and true recognition of God are in the crucified Christ.”

Wesley Hill is a PhD student in the Department of Theology & Religion at Durham University in the U.K. You can follow him on Twitter at @wesleyhill.