Wesley Hill: Remembering for one another

When suffering has no easy solution.

A couple of months ago, during the Christmas holiday season, for the first time in a while, all three of us kids were home at my parents’ house. There was a fire in the fireplace, and the living room was buzzing with laughter and the kind of joyful conversation that’s only possible after long separation.

Until we heard a shout above the buzz. “I’m lost! I don’t know where I belong or who I belong to!” We all fell quiet, looking across the room to where my 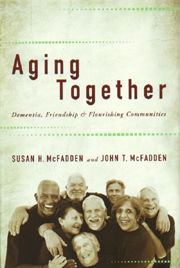 grandmother sat in the recliner. Her brittle frame was draped in a wool blanket; her wig was askew but still hiding the patches of her faintly white, almost translucent hair. She looked like a visitor from an alien world suddenly dropped in the middle of a party, the aspects of which offended her native customs. Her confusion was touchable, obtrusively present. She kept talking: “I see all of you people, but I don’t know who you are. I don’t know where I’m going to sleep tonight or where my home is.”

It was a rare moment of self-reflection on her part. I’ve seen my grandmother confused before. But normally she’s not aware of living with the reality of vascular dementia. It’s not normal for her to be able to name the disorientation the disease has caused. But now, she was looking around at a family she didn’t recognize and saying, like a fish that notices water for the first time, “Hey, I’m swimming in water. And I hate it.”

There are no easy solutions to caring for someone with dementia. Thankfully there have been some excellent reflections recently published on how churches and communities can help ease this kind of disorientation for people suffering from dementia. “Aging Together: Dementia, Friendship, and Flourishing Communities” by Susan H. McFadden and John T. McFadden is a good example.

One thread that unites these books is the shared conviction that friends and fellow church members can anchor and stabilize the aging person even when she may forget her own name and lose touch with her identity. We can remember for someone and keep alive the familial bonds when she herself may not remember.

As much as I believe that, I see its beauty as my mom cares for my grandmother, answering the same anxious questions a hundred times each day, or a hundred times an hour. I also felt, hearing my grandmother voice her anxiety that night at home, that no amount of friendship or community will ever be able to undo the anxiety completely. In a profound sense, the battle has already been lost. Never again will my grandmother see me and realize instantaneously that I’m her daughter’s son, that she taught me how to tend a garden in her background twenty-five years ago, that she attended my high school graduation and found me afterwards to squeeze my hand and say, “I’m so proud.”

All this will only seem like failure if we think it is the family’s or the church’s or the community’s job to facilitate total healing in the first place. But it isn’t. However much we exert ourselves, the institutions we serve, the churches we pastor, the families we’re part of won’t be able to stem the inevitable tide of dementia.

What we can do -- what we’re called to do -- is inhabit that failure in solidarity with people like my grandmother. Compassion and generosity are possible for us. In the shadow of death, we can love and be loved.

Wesley Hill is a PhD student in the Department of Theology & Religion at Durham University in the U.K. You can follow him on Twitter at @wesleyhill.