Two decades after she was pulled from a mass grave, a survivor of the Rwandan genocide reminds us not to hold Rwanda in the memory of its past but to honor those who embody the hope of their nation’s present and future.

Editor’s note: In June 2020, nearly three dozen people alleged that they saw or experienced “spiritual and psychological abuse" by Christopher L. Heuertz; he posted a public apology on his webpage in which he acknowledged that some of his friendships with women “became inappropriate in nature.” A later investigation by an independent, third-party investigator on behalf of Gravity found no evidence of misconduct. Gravity is no longer in operation.

It was my last night in Kigali. I had stopped by a friend’s place to meet his family. His wife Clémentine met us at the door and welcomed us into their home.

Throughout my international travels, I’ve come to expect an elevated sense of generosity when it comes to hospitality, especially outside the West. Clémentine’s kindness exceeded my expectations.

She immediately took me by the hands and led me to a sofa in their living room. After making sure I was comfortably seated, she began preparing tea. Their youngest child, Chantal, a confident 3-year-old who spoke only Kinyarwanda and French, took the seat beside me and did her best to communicate.

Clémentine hadn’t been expecting guests, but she expressed only sincere warmth and kindness. Seeing the difficulty with which Chantal and I were fumbling through our conversation, she brought me a cup of piping hot tea and joined us.

Their dimly lit home was meager and modest. Clémentine spoke over the background chatter of a color TV that flickered in the corner. She asked me where I was from, what I was doing in Rwanda and questions about my family.

In every way she was lovely and charming, but all I could think about was the painful story I knew to be hers.

It was 20 years ago this month that Rwanda’s unspeakable genocide claimed the lives of an estimated 1 million Tutsis and moderate Hutus. I’ve not known how to refer to the remembrance of the genocide, because using the word “anniversary” doesn’t seem appropriate.

Twice in the last seven months I’ve traveled to Rwanda. On each of my visits I’ve met with the undramatic heroes of hope who stood above the hate and violence. I’ve visited schools, churches and mosques where some of the massacres took place. I’ve met with both killers and survivors. I’ve left each of my visits devastated by the horrors of the stories I’ve listened to and inspired by the courage of those who’ve done the hard work of forgiveness and reconciliation.

But in that moment, sitting across from Clémentine, I felt nearly paralyzed.

She didn’t know I knew. She hadn’t told me her own story, but I had heard details of it from her husband.

And so, sipping on my tea, I tried to be present in the moment. However, all I could think about was her survivor’s story.

Clémentine was 9 years old in 1994 -- just a little kid. She was a fourth-grade student with starry-eyed dreams and unbridled ambition. But during Easter week that year, everyone around her either was killed or took part in killing.

When the massacres began, those responsible for carrying out the ethnic cleansing were unpracticed murderers. And so, I was told, those who died early in the genocide suffered more because they were killed by inexperienced butchers who knew little about taking another person’s life.

As the Interahamwe (the pro-Hutu youth militias primarily responsible for carrying out the genocide) raided Clémentine’s village, they attacked her, attempting to beat her to death. They tossed her body into a pit and left her for dead.

Countless others in her community had died that day, most hacked to death with machetes in order to save bullets, many at the hands of folks they had known their entire lives.

What was once a thriving community was overcome with the stench of death.

There were no family members to be seen grieving the deaths of loved ones, only those who were complicit in the killings or too afraid to stand up to the murderers.

But the next morning, one of the Hutu girls from the neighborhood put her tribal loyalty aside and jumped into the mass grave. She frantically searched through the corpses, looking for friends who might have survived.

Within moments she found her beloved classmate Clémentine, barely breathing but still alive.

What a powerful image of community. What a profound image of resurrection: a life literally pulled from the grave.

As I sat across from Clémentine, I was overcome with pain -- pain for the trauma she’d experienced, the sleepless nights she’d undoubtedly fought through, the moments of despair that had no doubt flooded her memory with those moments she lay in that grave.

But sitting in her home, I was reminded not to hold Rwanda in the memory of its past but rather to honor those who embody the hope of their nation’s present and future. Clémentine refused to let herself be defined by what had happened to her.

Her warmth and kindness and generous hospitality invited me into her present, her new reality marked by healing and hope, forgiveness and reconciliation. 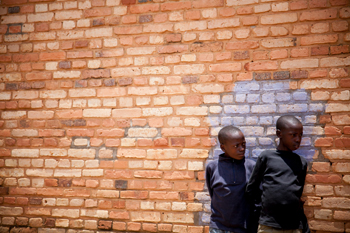 This church in Kibeho was attacked during the genocide. Now rebuilt, the holes from which the assailants attacked the congregation are now painted purple as a reminder.

Not keeping Rwanda tied down to its past is a reminder that each of our stories evolve in dynamic and unexpected ways. That when we come together despite our differences, look for life in places of death and practice resurrection in community, God will always be near and is always present.

This moment awakens us to the possibilities in our own lives. What are the signs of life in our own spaces of death? Where are we faced with invitations to put our differences aside and look for life among the dead?

Though we grieve with Rwanda at this solemn time, may we be inspired to live into the responsibility of our forgiveness, the possibility of our solidarity and the promise of reconciliation.

Photographer Nikole Lim's blog On Pilgrimmage and songwriter Aaron Strumpel's song "One Hundred Days" came out of a pilgrimmage to Uganda and Rwanda with Heuertz's organization, Gravity, a Center for Contemplative Activism.

Forgiveness is at the heart of the gospel, but learning how to embody it is not easy. In their new book, "Forgiving As We've Been Forgiven," L. Gregory Jones and Célestin Musekura provide a guide for the practice of forgiveness.

A survivor of the Rwandan genocide labors with World Vision International to bring healing to her country.