Skip to main content
How should Christian leaders respond to a pandemic? What is the church's role during the global coronavirus outbreak? New offerings and resources from the Faith & Leadership archives can help in these difficult times. »
CongregationsChristian LeadershipLay leadershipInnovation

Do you need full-time clergy to be a vital congregation?

Don’t let the ingrained belief that only churches with full-time pastors can thrive keep you from making the switch to part-time clergy, writes an author who has researched the effects of part-time ministry.

As the coronavirus shutdown of 2020 takes a hefty toll on the coffers of congregations, many will soon have to ask whether they can still afford a full-time clergyperson. Shifting to part-time clergy can save tens of thousands of dollars -- enough in some cases to keep open a church that otherwise would have to close.

Yet mainline Protestant churches routinely resist going part time, even when they’re between pastors and taking a fresh look at the position. They’ve heard from pastors and from their denominations that part-time ministry all but guarantees further decline. But that’s not true. 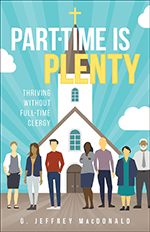 In the course of researching part-time clergy in 10 states, I’ve visited 20 mainline Protestant congregations that have found more vitality, not less, in key areas from worship to mission after cutting back from having full-time clergy.

They’ve done it by empowering laypeople to use their gifts and fulfill ministry passions that never got traction under a full-time pastor with an impossibly vast set of responsibilities.

In today’s tough economic environment, we can no longer afford to maintain the belief that the only churches with bright futures are those with full-time clergy. We must shed the thinking that dismisses the part-time ministry option -- a mentality that may in fact hasten the demise of local churches.

In my work both as a reporter and as a pastor, I’ve found that mainline congregations tend to begin with an assumption that full-time ministry is always the ideal. I found this in my own church, First Parish Church of Newbury (UCC). Prior to my arrival as part-time pastor in 2013, parishioners had clung to a full-time pastorate until the endowment was depleted, deficit spending was devouring cash flow, and the prospect of disbanding was suddenly on the table for a congregation founded in 1635. The small flock had so equated going part time with giving up that congregants, for a long time at least, would rather have gone broke trying to retain a full-time pastor.

“We were afraid we wouldn’t be a real church” if the pastorate were to go part time, said Ron Bookbinder, a ruling elder at Clarendon Presbyterian Church in Arlington, Virginia, whom I interviewed for my book.

He realizes in hindsight that this belief was unfounded; Clarendon made the switch and is thriving, with growing membership, more participation in outreach and fresh, creative uses of their flexibly redesigned sanctuary. But letting go of the bias and trusting in God to water and bless a thoughtfully structured part-time arrangement took time.

The failure to view part-time clergy as a viable way to structure ministry can lead churches to unwittingly stack the deck against a successful part-time pastorate.

Judicatory staffers may urge congregations to keep clergy full time for as long as possible, for example, because they regard part-time as the kiss of death. But that’s a mistake. Churches that wait too long to go part time and then poorly structure the ministry all but guarantee an inward-facing collapse.

If they’re blessed to have endowments, as my church was, they may deplete those coffers by paying clergy salaries they can’t afford. They use up monies that could have enabled future investments in ministry, with no new flourishing to show for it.

What’s more, congregations have by then used up precious time. A membership that was once young and energetic enough to take on more ministry responsibilities in a part-time rubric is severely diminished in size and energy by the time the switch happens.

At that point, fiscal margins are razor thin or the church is hemorrhaging cash. Laborers fit for the harvest alongside a part-time pastor are now few. On their knees and fearing closure, congregations in this situation reluctantly go part time at the last possible hour. But by then, their continued decline is virtually a fait accompli.

When they fizzle out, they often hear, “I told you so. Part-time is the kiss of death.” That mistaken analysis misplaces blame and perpetuates the full-time bias in mainline church culture. The cycle of death unfortunately and unnecessarily continues.

In some cases, congregations inflate assumptions about how much in church life must be done solely by clergy. Convinced that only clergy can effectively preach, administer sacraments, pray with the dying, visit the sick and represent the church around town, congregations will shrug and concede: “Oh, well. Too bad. Wish our church could do more for members, friends and the wider community. But without full-time clergy, our hands are tied.”

That mentality distinguishes congregations that keep declining from those that take steps to empower laity in new ways and thus thrive. Learning that roles don’t have to be so rigid, that laypeople have more authorization than they realize, that ministry in all its profundity and blessings is meant to be shared -- all of this requires a concerted mental shift.

To help congregations to make the shift, we must redeem part-time ministry from stigma. That process will need to include heightened appreciation for the important, normative role that part-time ministry has played through most of the church’s history. And it will need to dispel the dismissive contemporary attitude toward part-time work -- not just in ministry, but in all segments of American culture.

In many circles, “part-time” unfairly conjures negative associations, as though it were a synonym for halfhearted, not really committed to the job. But why?

“Full-time” refers to working 40 of the 168 hours in a week. That’s less than 25% of the week, yet it’s valorized as if it were a complete commitment, in contrast to, say, that of a part-timer who gives 18% of his or her entire week to a 30-hour job.

In other words, we all give only a fraction of our lives to work, even those of us who are salaried and put in more than 40 hours. “Full-time” is a misnomer that seeks to carve out a separate, elite class of worker. If our lexicon were more precise, we would acknowledge that everyone works part time.

Dedication is a qualitative measure of commitment to work that gets done in an allotted time frame, no matter how large or small that window of time happens to be. It is not a quantitative measure based on the time frame’s size alone.

Hence, those engaged in ministry on a part-time basis (under 35 hours per week) can be every bit as dedicated as their full-time colleagues. The part-timers are just working on the right scale for the faith communities they serve.

The reluctance of mainline cultures to view part-timers as every bit as dedicated as full-timers is akin, it seems, to America’s cultural resistance to working mothers in the 1950s.

The mothers of that era who worked outside the home were looked down upon, pitied or both. Because they did not spend all their working hours solely on homemaking, they were scorned for being insufficiently dedicated to the children and husbands who were presumed to need their full, selfless attention.

This attitude was inherently classist, as only middle- and upper-class households could afford to live such a lifestyle, and glamorizing it only reinforced a premise equating wealth with moral wholesomeness.

Mainline denominations, despite championing progressive public and ecclesiastical policies, have remained largely stuck in a 1950s idea of a dedicated clergyperson. Expecting that the church must be the clergy’s sole professional focus is as dated as insisting that every mother must stay at home and forgo paid work in order to raise her kids.

Although church leaders often worry that switching from full-time to part-time clergy will lead to decline, congregations across the country are finding new vitality by reimagining the roles of clergy and laypeople.

To my white sisters in Christ

A Black mother of sons challenges white women to move beyond silence or tepid, timid outrage to work for a world in which all of God’s children can live more fully and fairly.