The professor of philosophy describes his own journey with Augustine and the importance of leaders paying attention to the formation of desire.

In his most recent book, “On the Road With Saint Augustine,” James K.A. Smith defies what a typical volume of theology might look like today.

“It’s a funky book,” Smith said. “But maybe I enjoyed writing it so much for precisely that reason.”

In a work that’s part philosophical, part personal, Smith braids together a journey for his readers through existential questions and his own anxieties.

“I’m still not exactly sure what I want to call it,” he said. “It’s a sort of existential exploration of our current cultural anxieties with the help of an ancient thinker.”

Augustine has relevance to our current moment, Smith said. He speaks with philosophical clarity and pastoral wisdom that can help us find our way in this confusing and chaotic time.

Smith is a professor of philosophy and congregational and ministry studies at Calvin University. He is the author of more than a dozen books and serves as the editor-in-chief of Image journal.

He spoke with Faith & Leadership’s Chris Karnadi about Augustine’s perennial message, the importance of the formation of desire, and how faith leaders can assess the ways their institutions are practicing formation. The following is an edited transcript.

Faith & Leadership: What do you hope people will experience in this journey that you’re taking in the book?

James K.A. Smith: It will land differently with different readers. This is one of the first books I’ve written where I didn’t presume that the readers already share my Christian faith. Many will, but it’s actually written in such a way that it doesn’t presume a shared commitment to Christianity. 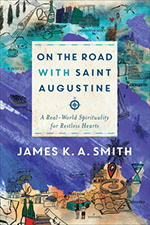 In some ways, I hope it’s a presentation of historic, ancient Christian faith that feels fresh because it doesn’t fit the caricatures of what Christianity has become in our late modern American context. That’s one hope, I guess -- that some readers might find it a surprising entree to a reconsideration of a Christianity that they wouldn’t have entertained or that they thought they could confidently walk away from.

For Christian readers, I hope what Augustine offers people is a spiritual diagnosis of our own hungers and wants and desires and loves, and why that still characterizes the adventure and journey of the Christian life.

In that sense, I suppose one of the takeaways I hope people find from the book is what I call Augustine’s spiritual realism. That is a kind of postural approach that refuses perfectionism and the illusions of purity and instead is trying to counsel people in the faith with grace and mercy, realizing all the ditches that we drive into on this road, and to find a mercy in that in itself.

F&L: What made you want to write the book in this way?

JS: Part of the answer to that question is therapy. There is a real sense in which I kind of had to write this book and needed to write this book yet couldn’t have written this book until I had done some of my own spiritual stocktaking in partnership with a wonderful counselor who walked me through some of my own anxieties, doubts and things like that. I don’t want to reduce the book to my own catharsis, but there’s certainly part of that.

The other thing is, I would say, a book like Thomas Merton’s “The Seven Storey Mountain” -- which looms much larger in my own spiritual life than anybody might guess from footnotes in my books. It struck me that there was a kind of unique genre about that writing, and so this was me trying to lean into a new genre that I hope had a kind of existential feel about it but still exhibited philosophical sophistication.

I wasn’t setting out to write a memoir. On the other hand, I felt like, because the kinds of questions that Augustine forces us to ask are such deeply personal existential questions, I couldn’t take myself out of the story. I also think there’s this deep philosophical subtext since the 20th century that we need to grapple with, and so I was trying to straddle all those hopes and goals in one book.

Whether I accomplish it or not is another question, but I did enjoy writing it. There was a certain liberation that came from writing without the obvious groove of a genre and trying to be a little more creative and innovative.

F&L: Could you talk about why formation of desire is so important?

JS: My project in “Desiring the Kingdom” and “You Are What You Love” was motivated by a concern to diagnose the assimilation of Christians to the defaults of the normative majority culture.

I’m trying to ask why Christians aren’t more peculiar. Why aren’t we weirder than we are?

The way to account for our assimilation to the default of the majority culture was not on the basis of what we believed or didn’t believe. It was much more explainable in terms of our having practiced our way into preformed ways of life and love. At the end of the day, what the culture has hoodwinked us into was not so much about what we thought or believed but what we had come to love.

Since we are these creatures who are really much more driven and animated and oriented by our longings, the cultural practices, or cultural liturgies, as I call them, were suddenly training us to love ourselves, power, wealth, whatever it might be.

We haven’t been fooled by bad information; we have been captivated by distorted formation. We needed a new attention to the dynamics of formation of the habits of the heart, which then turns into a renewed articulation and intentionality about Christian worship as one of those engines for counterformation.

F&L: How should Christian leaders think about formation and desire?

JS: I think people who have leadership responsibilities should first of all shift their self-understanding so that leadership doesn’t just mean that they are the articulators-in-chief. They’re not just the ones responsible for the message, so to speak.

In some ways, leadership is really about being an architect of the ethos of a community, which means that some of the most significant influence that leaders exercise is their ability to shape the rhythms, rituals, routines and practices of a community or an institution.

As the curators of the repertoire of practices of a community, leaders need to do a sort of liturgical audit of our institutions and ask ourselves not just, “What does our mission statement say we believe?” but, “What story about being human and human flourishing is being rehearsed in the rhythms and practices of our institution?” That informs how we think about how reform and renewal have to happen as well.

F&L: How do Christian leaders perform that audit?

JS: On the one hand, you could imagine a kind of outcomes-assessment way of looking at it. It strikes me that it’s probably a little bit more complicated than that.

Ideally, what has to happen is you have to find a way to hit the pause button, try to gain some distance on an institution and its rhythms and practices, and then look at the things you do and ask, “What are they doing to us?”

That mostly looks like trying to take the things that are familiar and taken for granted in your institution and then asking, “What are these practices teaching us to love on an affective level, even if our message might be saying something else on an intellectual level?”

Now, I realize this is still a bit abstract, but it’s always going to be highly contextual. Just to concretize it a little bit, if you ask, for example, “What do we affirm about race?” versus, “What do we perform in our practices about race?” this is where, I think, we experience a big disconnect.

I think too many institutions still imagine that racism is a kind of ideological reality; if we reject the ideological reality, then we can be confident that we are anti-racist. But what, of course, we actually have to account for is the performed repertoire of practices, which might be telling a very, very different story of privilege and centering.

Louise Hansen: Animals play a part in our spiritual lives

Including pets in church services can be one way to re-imagine the meaning of fellowship and worship.