Everything about the early Christians was surprising to the Roman Empire. Embodying that surprise would do modern Christians much good, says a professor of New Testament.

Like many Christians, Kavin Rowe has been struck by how much and how little Christianity is present in America’s current cultural moment. Christianity is a common element of daily life, but Christian virtues feel much more rare.

“We are both really familiar with things Christian and have utterly forgotten what Christianity is,” he said. “That simultaneity is really confusing.”

To work through the questions about Christianity and its impact on society, he began gathering other Christians across academic disciplines and vocations to get a fresh look at Christianity.

“In order to think Christianly, we need to be interested in everything, thinking across sectors and not just in our own little world,” Rowe said. 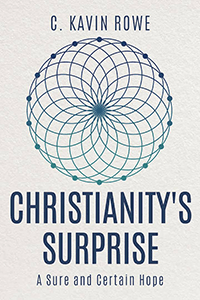 What resulted from those conversations, held over regular dinners, was a deeper look at Christianity’s impact. From its earliest days, Christianity was unique. It was unprecedented in the Roman Empire. It changed society and created educational and health care institutions. It drew people into a new narrative and new behavior. Recovering some of that uniqueness now is the goal of Rowe’s new book, “Christianity’s Surprise: A Sure and Certain Hope.”

Rowe is the George Washington Ivey Distinguished Professor of New Testament at Duke Divinity School. He is also the author of “One True Life: The Stoics and Early Christians as Rival Traditions” and “World Upside Down: Reading Acts in the Graeco-Roman Age.”

Rowe spoke with Faith & Leadership’s Chris Karnadi about how the book came together, what Christianity’s surprise did in the earliest years of the church, and how to recover some of that surprise today.

Faith & Leadership: Where do you think Christians have lost some of the basic understanding of Christianity over the past few centuries?

Kavin Rowe: One of the chief places is in our conception of the human being. The first and most basic problem, I think, is probably this misunderstanding of the autonomous individual, which I talk about in the book. We’ve come to think of ourselves as isolated bundles of wishes, hopes and desires who have a kind of freedom that we are in charge of and can exercise how we see fit.

That understanding of the human being has slipped into Christian understanding because it pervades our culture at every level, in the West anyway, and so we cannot avoid speaking like that.

But this way of talking about autonomy has been particularly corrosive for the common good and for Christians’ understanding of the way they’re in church together. It affects whether or not church can have primacy of allegiance or whether we’re really most devoted to ourselves and our own sense of what we’re supposed to be.

F&L: How is Christianity a surprise?

Christianity was surprising also in its particulars. It introduced patterns of life into the world that caught people by surprise in a good way. The Christian vision of humanity that entered the world applied to everyone and said that everyone was invited to church, invited to be cared for and loved in Christ and become part of this new family.

It had an alternative imagination that was structured more on Scripture and on Christian tradition than on pagan literary imagination or a regular pagan life in the Roman world. For example, it invented the category of the poor in the ancient world.

Poverty of course existed before, but there wasn’t a distinct way of seeing the world that enabled the poor to emerge as people that in fact you could see Christ in. It was also surprising in how it brought Jews and Gentiles together and enabled them to be in fellowship with one another and to call each other brother and sister.

F&L: How does Christianity’s surprise make its way into institutions?

The way the church came into Roman society was very distinct and had a lot to do with features of Christianity itself. The first aspect was imaginative and theological in nature, the church/world distinction.

The church had a sense that it was not exactly coterminous with the world, or with other societies or clubs or philosophical schools or things that were already on offer in the Roman society. Christians believed they had a distinct thing, a community that God was gathering around Jesus the Messiah, the worship of him and devotion to him.

That belief had its sociological bite, you could say, when the church began to develop leaders, offices and structure. It’s one thing to say, “We’re going to be in the world in a very distinctive way in our heads,” which they did say.

The self-understanding of the early Christians meant that they had to invent things in the world that allowed them to embody their convictions and required a kind of social explication so that they could maintain the identity as the church.

Those kinds of explications were structural, so they had the offices of bishop and deacon. They were also familial, in the sense of treating other Christians as brothers and sisters in Christ, that kind of a language, the development of family vocabulary.

Then, because of what the Christians thought the human being was, the image of Christ who’s the image of God, they began to understand that they needed to care for the people in the Roman world as they would encounter them as Christ.

That new vision applied not only to people whom they knew or liked but also simply to sick people, poor people, whoever was out there. On the question of the sick, in particular, there were a couple of plagues that really kick-started the Christian ability to be present to those who were sick and dying.

It wasn’t that they thought that God would protect them from the plague or from death. It’s that they had a view that they need not fear death, and that view about not needing to fear death allowed them to draw close to death and to care for people who were sick.

In trying to do that, they discovered that they needed a structure in order to care well for people who were sick, and so they began to develop what eventually became a hospital. The hospital in the ancient world was really invented by Christians; today’s hospital has deep roots there too.

This is obviously relevant today with the pandemic. Christianity is training for how to hope in the face of death. It’s training for how to tell the truth about human fragility and our inability to save ourselves, and about the hope that is held out to us in the resurrection of Christ.

All the panic about the coronavirus makes a certain sense. But it’s important for us as Christians to see other human beings not in terms of some being worth more than others. Each and every human is the reflection of Christ, and to become the kind of doctor or nurse that can see each patient in that way is critical.

In terms of education, once Jesus was no longer walking around with the disciples but was present to them in worship, they realized that in order to maintain the continuity with his teaching, with his life and with the witnesses of the Christ’s time on earth, they needed to find a way to transmit the tradition.

What they landed on was teaching. That was a critical way not only to maintain continuity but also to tell people what being Christian was. You’re not born into the world knowing how to be a Christian. You have to be taught how to read Scripture or see yourself in Israel’s story.

By the mid-second century or so, you had people like Justin Martyr and so forth who were consciously trying to relate Christianity to philosophy and education. But what they discovered is that in order to educate someone in Christian things, they had to have them read Scripture and learn Christian things, and so they began to set up various sorts of schools. Some were more formal, some less formal.

By the time you get to Origen, he sets up what becomes really the first university for Christians. This university wasn’t just head knowledge; it was also a place where Christians learned to imitate their teachers in lives of discipleship.

F&L: What do you think recovering Christianity’s surprise would do to institutions?

Gail Song Bantum and Brian Bantum: Marriage is an opportunity to celebrate difference

In their new book, Gail Song Bantum and Brian Bantum describe working through race and gender in their own marriage.

‘What We Wish Were True: Reflections on Nurturing Life and Facing Death’