Living into joy, late in the pandemic

A walk by a stream prompts a writer and spiritual director to wonder: Could a fresh understanding of joy help restore us? 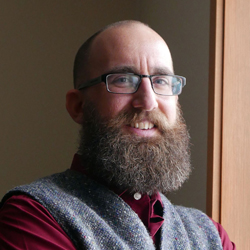 Near the end of the Root River Trail, near my cabin in southeast Minnesota, a path winds downhill through tall grasses until it reaches a place by a stream where two forks meet. One fork reflects the setting sun. The other is in shadow. There at the stream’s edge, I stand still, take a deep breath and hope to find a joy I have not experienced in a long while.

Where the two forks converge, they ripple over the rocks, plunge together into a deep pool and then heave downstream. A breeze whispers through the trees, and I hear the rushing of the water. Two -- maybe three -- cardinals take turns singing in short bursts to one another. I can’t see them, but I know they are brilliantly red this time of year.

I find myself lingering by the stream, out of breath.

It’s been almost a year since the pandemic began and disrupted my life -- as it has the lives of so many others. After 15 years as director of a retreat center, I have struck out on my own. I wanted to find collaborators interested in pursuing their teaching and writing callings in these difficult times. The response has been complicatedly positive.

I kept putting off slowing down like this. And many ministry leaders I know say the same. In the beginning, we may have expected physical distancing and canceled public events to translate into spaciousness and quiet, but the reality has proved quite the opposite.

Rushing challenges have taken us well beyond the familiar need to slow down. We’ve been pressed to retool all the ways we knew to do ministry.

We’ve navigated the dizzying ebbs and flows of new plans and near-constant readjustments. We’ve absorbed the presumption that leaders can do all such things without flinching. We’ve pretended it’s possible to be unflappable and calm long since the jolt of the first lockdown.

These many months later, exhaustion has worn down our spiritual practices and our joys in ministry.

My own efforts to revive my prayer practice have gone the way of my exercise plans. I’ve never slept less or weighed more. At first, I let it all go to focus on emergency decisions. Later, I resolved to live differently.

But the pressures continued to humble my resolve, and I confronted hard questions: Where has my motivation gone? How will I find enough energy to care for myself, let alone the people I serve?

So now what? That day on the trail, I was standing at the stream’s edge, eyes closed, head tilted up, listening for something to speak to me.

I wish I could say I heard an easy answer. It would have been nice if my sense of spiritual and physical well-being had finally washed back in. But at first, I didn’t hear much beyond the gurgling water.

Then I opened my eyes and looked down. I noticed the edge of the stream, where it met the land at my feet. I thought back to the last time I’d been here. The water’s edge wasn’t quite where I remembered.

If I’m brave enough to admit it, I am, like so many of my colleagues, weary from wrestling -- with the months of fear and ambiguity, with the depth of rage and social unrest, with the disconnection that far surpasses the emotional weight of my former busyness.

I don’t know many people who are still able to take a day or two off and then return to their callings with gusto, as they once could. That has made me wonder about the deeper and more persistent dynamics of ministry in a time of change.

Standing still by the stream and noticing its changing shoreline, I wondered: Was my primary challenge my beleaguered sense of joy?

No, I realized; it was not. I was missing something more than pleasure and happiness. What had grown unsteady was my holy contentment and energizing sense of calling and purpose.

I realized that I had been trying to accompany others as if my own joy were a fixed point along the stream. Naturally, I would prefer joy to be a constant. Yet when the waters rose and I tried to hold steady, it didn’t take long for me to be submerged. That might explain my current sense of feeling weary, overwhelmed, flooded -- maybe even washed up.

What if, instead, my joy became as accommodating as a shoreline? What if, instead of resisting, I adjusted myself to the ever-changing waters, the inevitable ebbs and flows?

I scanned up and down the stream looking for a single point that appeared permanent. What I saw was a shoreline that was constantly adjusting, in countless ways, to the moving stream.

And to find it, I suspect, we should not turn inward. Instead, we should lean in, listening for stories that arise from our communities that testify to God’s faithfulness and enduring grace -- even in these days -- so that our joy might track the reality of our lives, as closely in drought as in flood.

The spiritual power of vineyards

A writer picking muscadine grapes in the late Florida summer experiences the vineyard as a living sermon.

From self-care to relationships with similar others, there are off-the-bike lessons to be learned from Peloton instructors, writes the director of the Thriving in Ministry Coordination Program at Leadership Education at Duke Divinity.

‘I Wish My Dad: The Power of Vulnerable Conversations Between Fathers and Sons’

In this adapted excerpt from his recent book, a writer and divinity school graduate offers suggestions for healthier relationships based on dozens of interviews with men about their fathers.

I can’t hug, but I can listen: My experience as a death doula during COVID-19

A death doula trained to help people who are dying and grieving drew upon the Black church tradition of “tarrying” during the pandemic.