You might think white conservative Protestants are more political than black or mainline Protestants or Catholics. You’d be wrong. 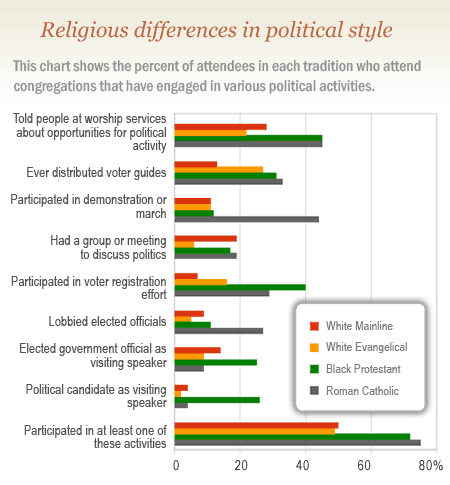 In both 1998 and 2006-07, the National Congregations Study asked congregations about eight different kinds of political activities. The figure above shows the percent of churchgoers who attend congregations that have engaged in each activity within the last year (The voter guide numbers give the percent of people attending churches that have ever distributed voter guides). Some things changed between 1998 and 2006: churches became more involved in voter registration drives, Catholic churches became more politically active in general, and fewer of the voter guides distributed by churches were produced by Religious Right organizations. But I want to emphasize two things that have not changed since 1998, so this figure combines data from both surveys.

Beyond voter guides, black churches are much more likely than white churches to engage in electoral politics by having a candidate or elected government official speak at the church, or by participating in voter registration drives. And Catholic churches are much more likely than Protestant churches to engage in the direct action and pressure group politics of marching, demonstrating, and lobbying elected officials.

In any event, differences among religious groups in how they do politics seem more important than differences in how much politics they do.