Are we choosing to propagandize ourselves?

Many years ago, Walt Kelly's comic character, Pogo, made a painful observation:

“We have met the enemy and he is us.” 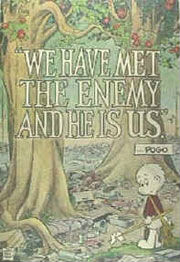 In a recent National Public Radio interview with Bob Edwards, Clay Johnson, the author of “The Information Diet: A Case for Conscious Consumption,” said that the two things people need informationally to make good decisions in our society are pragmatism and synthesis. And we are getting less and less of both these days from our journalism. People who already agree with MSNBC tend to watch MSNBC, he observed. People who already agree with Fox News tend to watch Fox News. And a growing portion of each group tends to believe members of the other group are unreliable and may even be out to get them.

Each group finds itself becoming increasingly confirmed in the opinions its members already firmly hold. Each group is carefully shielded from having to face any facts that don't square with its members’ already strong beliefs. Neither group is encouraged to synthesize various perspectives, including perspectives that might differ from either extreme. No one in either group is encouraged to think in pragmatic terms, which almost invariably require mediation, negotiation, compromise, weighing options and alternatives, and living with the uncomfortable insight that none of us has a monopoly on truth. This is unfortunate, because most of the best decisions result from the collective wisdom of highly differentiated groups.

It would be convenient but inaccurate simply to blame the present situation with respect to public information on corporate greed or partisan politics, Johnson went on to note. We aren't being forced to consume propaganda in a totalitarian state. We are choosing to propagandize ourselves. If our nation is becoming hooked on the mentally polarizing equivalent of crack cocaine, it is because we are demanding it from the information dealers of our own choosing. The problem, Johnson reports (and his analysis is based on a careful study of our behavior) is that we tend to want confirmation for what we want to believe is true. We resist information, data, ideas and facts that are contrary to our immediate self-interest, or, even more problematically, to wishful thinking about ourselves.

Where's Pogo when you really need him? Or, for that matter, where are John Calvin and St. Augustine of Hippo?

It has become fashionable for even some of the most moderate, the most sensible, voices in our society to try to pin the rap of the progressing polarization of our society on somebody “out there.” We'd all prefer to believe this is the case. But the enemy resides in every human breast. We really are our own worst enemies when it comes to living in a functional society. The culprits are not simply the venal politicians who will say whatever they think people want to hear just to get elected. The culprits are not just the heads of news corporations pandering to the lowest common denominator in the most sensational terms. Unappealing as their actions may be, they are just delivering the packages we ordered.

So, Pogo, having met the enemy, how do we love him enough to tell him the truth that will set him free? That is, when the “he” or “she” is us?

Michael Jinkins is president and professor of theology at Louisville Presbyterian Theological Seminary.

Editor's note: Walt Kelly created this poster for Earth Day in 1970. The image is copyright(c) 2011 OGPI and used with permission.