In fractious times, Rowan Williams’ patience is what Christian institutions need, even if they don't know it.

Shortly after the announcement last week that Rowan Williams will step down as Archbishop of Canterbury at the end of December, he suggested his successor would need the “constitution of an ox and the skin of a rhinoceros.” 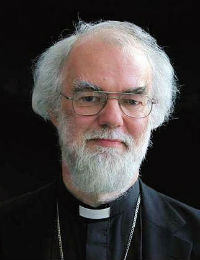 Taken out of context, his comment could be mistaken as a playful jab at the infamously demanding nature of his office. But to more careful observers, the quip was unmistakably tinged with a sober realism, even a hint of sadness. Driving his point home were the critical op-eds that multiplied as soon as the news broke, many of them deeming Williams' ten-year tenure to be a disappointment in view of a fracturing worldwide Anglican Communion.

Critics both liberal and conservative lament that Williams' weakness has been his refusal to lead with a heavier hand. These arguments ring with a certain pragmatism, particularly if you subscribe to a theory of a leader whose success is defined by sweeping changes, wielding her office as a bully pulpit if necessary. The problem is that Williams is most often described as an incredibly sweet and thoughtful man who is patient to a fault. The kind of person who considers it his job to answer the letter of a six-year-old girl who wants to know what God is like. Leaders of this temperament know nothing of bully pulpits.

Another strike against him has been his formidable learning, which seems to provide even more grist for his critics' mill that while he may be at home in the halls of academia, he is clearly overmatched by the cutthroat world of ecclesiastical politics. The only compliments they seem able to dredge up for the first among equals is that at least he was likable. That, and maybe a wry guffaw about the beard.

In their rush to paint Williams an affable ivory tower intellectual ill-suited for leadership, the self-appointed judges missed that their target takes leadership cues from someone other than Steve Jobs. As Ben Myers winsomely argues over at ABC Religion & Ethics, Williams' patience is not a flaw but the mark of a Christian leader:

"Williams's decade as Archbishop of Canterbury has been marked above all by a commitment to dialogue. At a time when our public institutions have surrendered to a culture of managerialism, when human relationships are instrumentalised and "outcomes" are given more weight than tradition, Williams has remained committed to a culture of dialogue, debate and negotiation.

His belief in the Christian virtue of patience shapes his whole style of leadership and public engagement. This is why, at Canterbury, Williams has consistently refused to wield political power or to dabble in the dark arts of managerial manipulation. He believes that leadership is not about winning, but about fostering a community that knows how to listen and argue and learn from one another - a community that practises patience.

Some time ago Jason Byassee made a similar point on this blog, noting that the "Archbishop sees the risen Christ as one who meets us in the enemy with whom we cannot leave fellowship. For him to kick the bad guys out of the church would, unfortunately, be to kick out Jesus himself." Opposite the Clint Eastwood school of leadership, Williams' self-understanding as a leader has been that of a servant or gracious host, making sure everyone has a seat at the table, no matter how unpresentable or unruly. He prefers keeping the ball in play, mainly because it's what he presumes Jesus would do.

In these fractious times, this is the kind of hospitable patience our churches and institutions may need for their own good, even if they don't know it. As President Obama is now well aware, our culture celebrates or crucifies leaders by tallying up foes vanquished, reforms instituted, swift decisions not second-guessed.

Contrast this with a leader of 80 million who would rather be known for simply encouraging adversaries to stay engaged with one another. It may not show up in the stat box, but it counts for the fragile bonds of unity that keep Christians in communion, at least for the foreseeable future. If the church is the household of God, Williams' peculiar style of leadership can remind us that the habits most proper to our common life are perhaps not acts of bravado, but better table manners.