Jennifer R. Ayres: Why inhabitance is the paradigmatic human vocation

The earth is a dwelling place, and human beings need to tend to that place as they would tend to their households, says the author of a book about ecological religious education.

Editor’s note: This interview was conducted in March.

Rather, it is a process of formation in which we understand ourselves as part of an interdependent system that includes both the natural world and other human beings.

Ayres makes this argument in her book “Inhabitance: Ecological Religious Education.” Tending to the place in which we live, she writes, is the human vocation -- and it should be cultivated.

“I think that religious education has to take as a central concern how Christians or other people of conscience are formed for ecological commitment,” said Ayres, an associate professor of religious education and the director of the doctor of ministry program at Candler School of Theology at Emory University. 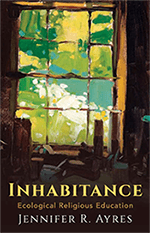 Ayres spoke to Faith & Leadership Editor Sally Hicks about her book, and about cultivating the Christian vocation of inhabitance. The following is an edited transcript.

Faith & Leadership: What do you mean by the “vocation of inhabitance”?

Jennifer Ayres: I developed the term “inhabitance” after a word study of Greek terms that share this root of oikos. Oikos in the New Testament and other Greek texts refers to a household, a place that people inhabit. It’s the root of terms like “economy,” “ecology” and even “ecumenical.”

The idea that it is a place in which we all live and it is made up of diverse members who contribute to that household was really powerful to me.

It shaped how I understood how Christians should relate to the ecosystem -- as members of it who contribute to its thriving, who relate to its other members, and who ensure its stability into the future.

And then I do make what for some might seem a pretty radical claim: that inhabitance is the paradigmatic human vocation.

I’m drawing on scriptural references from Genesis to Revelation about the idea that the earth is a dwelling place for both human beings and the more-than-human world, and for God. The human vocation, in light of that, is to tend that place.

The language of vocation is helpful to me, because it’s something that we’re always striving and living into. But it’s not something that we can check off our list, like, “Oh, I’ve done inhabitance.”

F&L: Are you primarily talking about the natural world, being one with nature?

JA: One of the concerns I have about ecotheological conversations or environmental ethics conversations is that sometimes they feel a bit removed for whole groups of people.

It feels like a conversation that’s reserved for people who have the luxury of time and resources to think about it.

It’s not something for people who just happen to care about the “environment,” but it’s actually a fundamental question about how we understand ourselves as a part of an interdependent system.

JA: Lorraine Code is a feminist philosopher who argues that the way in which we have thought about nature -- focusing on things like identifying and taxonomizing and putting things into categories and collecting the data about nature -- has contributed to a pattern of thought that actually can translate into how we relate to other human beings in a pretty troubling way.

It also changes how we think about a God whose loving presence, whose divine creativity, continues to infuse that household with possibility.

One of the risks of talking about ecology or the environment as a household is that for many of us, the household is a place in which we don’t feel safe or loved or nurtured. In fact, it can be a site of harm and abuse.

I would say that’s precisely the power of the metaphor of household. Because of our interdependence within it, we have great potential to both love and nurture but also harm.

F&L: You frame the book not with the narrative from Genesis, which would seem like the obvious one, but with the prodigal son. Talk a little bit about that narrative.

JA: The prodigal son has been interpreted in many of our church settings as a story about ungratefulness or of riotous living -- an individual who has gone down the wrong moral road.

The thing that, to me, is impressive is that here is a character who has fallen away from his love and responsibility for his family’s household and recognizes his failures. He returns to the household in a posture of repentance. The beauty of the story is that the father reopens the household to that child.

One of the more powerful aspects of that story is that he doesn’t say, “Welcome back home; you’ve been away for a while.” What the father says is, “My son who was dead now lives again” (Luke 15:24).

So it’s a very powerful theological metaphor for resurrection. It can be powerful for us as we think about our ecologic crises, our environmental crises, the health of the planet. We perhaps have failed to live in a loving and committed relationship to that household, and yet there is still room for our resurrection.

F&L: You also are arguing that this awareness requires intentional teaching. Why that emphasis?

JA: I really do see it as a question of formation, and I see it as a process. We’ve all read things that we probably felt very convicted by that changed how we viewed things, that changed our minds about key commitments in the Christian tradition, for example, but ecological faith is something more than that.

It’s not a changed perspective, but it’s actually a whole new way of life, which -- I’m very informed by the work of Craig Dykstra -- we are formed in a particular way of life by the practices in which we engage. And that is, at its core, an educational process.

F&L: You give examples in both a rural and an urban setting. One is a rural church in North Carolina. You also write about Trinity United Church of Christ in Chicago.

JA: Some of the things I read very early in my own path were written by people like Rachel Carson and bell hooks and Wendell Berry, all of whom are in relatively rural or wild environments, from the coast of Maine and the hills of Kentucky, places like that.

I think that’s what a lot of us think of when we think about green faith or ecological commitment. We think of what we might call pastoral ideals, this rural ideal of what it means to care about the environment.

However, most people in the United States, and indeed around the world, live in urban centers, and there are deep and long-standing commitments to living in ways that can sustain those places well into the future.

There are ways of living in those places that actually are gentler on the planet than living in more rural places, which require more fossil fuels and so on. I’m trying to broaden the view of what constitutes ecological faith.

I worked with a collaborative research team, and between the four of us, we visited 14 different communities, and Trinity was one of those communities.

I think that Trinity’s deep commitment to its place on the South Side of Chicago is a fundamental ecological commitment that has been a part of that congregation from its inception.

Those are resources that can be drawn on in a variety of contexts that don’t depend on access to wild space and don’t trade on this romanticization of the rural, the woods, the coast -- that recognize that practicing ecological faith is something that we do in the places where we live.

They are responsive to the places that we live, so we develop practices that are appropriate to where we live.

F&L: What are some of those practices?

They’ve established a farmers market that partners with a black farming cooperative farther south in Pembroke, Illinois. They have a building project in which they were establishing a green roof. They’ve done things like winterizing elder members of the congregation’s homes.

Most recently, they have been working on establishing an ecological village project that would include housing, education, a community center, green jobs training, medical care -- all within a green building footprint not too far from the church.

F&L: You say that being part of creation makes us vulnerable. How?

JA: I’m partly trying to sort out my own feelings of vulnerability, and in the face of some of the crises that we are experiencing now -- I mean, we’ve just gone through this period of horrific wildfires in Australia and terrible stories of suffering communities, burned forests and huge numbers of animals who have suffered and died.

I think if we really allow ourselves to connect on this deep level that I’m advocating for, we open ourselves to the risk of real grief over the losses that we’re seeing, and also to the recognition that we are partly responsible for those losses.

That combination of both bodily and emotional vulnerability is both what binds us to our ecological context and is the thing that perhaps most scares us about that relationship -- and perhaps is at the root of our desire to separate human life from the rest of creation.

From the city to the suburbs, Wendell Berry can help us imagine virtuous forms of living, says the author and Spring Arbor University associate professor.

For 40 years, a small, rural North Carolina church has played a crucial role in what is now known as the environmental justice movement.

A social enterprise in Huntington, West Virginia, focuses on the dignity of its workers while seeding the green economy and helping strengthen Appalachia.