Joshua Swamidass: Opening up the conversation about Adam and Eve with science

Instead of trying to get everyone to agree in debates over human origins, the Christian biologist aims to have an open, informed dialogue in his new book.

As a Christian, scientist Joshua Swamidass views the wonders of the world as evidence of an artist at play.

From his standpoint, evolution is basically a musician improvising on a theme over and over again -- and humans have access to only a sliver of its grandeur. There’s a lot of beauty in evolution, he said.

“Sometimes artists make stuff for audiences,” he said. “Sometimes they just make up stuff for themselves.”

But Swamidass recognizes that his awe at evolution isn’t always shared in Christian circles. Some are wary of evolution, thinking that it threatens a core conviction of Christian theology in creation. Approaching this standoff between evolutionary science and creationism is the focus of his new book, “The Genealogical Adam and Eve.”

As a computational biologist and Christian, Swamidass aims to open up the dialogue by talking about the possibility of Adam and Eve and setting ground rules for a productive conversation, emphasizing the need for patience and genuine engagement between communities who may disagree.

Swamidass is a scientist, physician and associate professor at Washington University School of Medicine in St. Louis. He earned his M.D. and Ph.D. from the University of California, Irvine.

He spoke with Faith & Leadership’s Chris Karnadi about the book and what virtues are needed to address such an important but hot topic with Christians and scientists alike.

Faith & Leadership: First, can you talk about the background? Why is there tension between scientists and Bible readers or theologians on the origins of humanity?

Joshua Swamidass: Well, if you go back 160 years ago, Darwin published “Origin of Species.” What’s interesting about that book is it doesn’t actually talk about human evolution. And the reason is Darwin knew right from the beginning that that was going to be extremely potent.

But a friend of his named [Thomas Henry] Huxley went straight there. The next year, he began a whole bunch of public debates about human evolution, or whether humans actually shared common ancestors with the great apes.

So that’s the grand debate. It’s been there for a while. And that’s really been the center of the creation/evolution controversy.

If you look back at that time, most Christians believed that the earth was old. Most of them had no problem with evolution in the animal kingdom, but when it came to Adam and Eve, that’s where things were difficult. The Scopes trial with William Jennings Bryan was really about human evolution specifically. It had nothing to do with animal evolution or the age of the earth.

If you talk to Christians today who are trying to make space for mainstream science and engagement, some of them have difficulty reconciling the two, and they’ll almost always come back to Adam and Eve in one way or another. Were they actually created by God de novo, in the beginning out of dust and a rib? Did they exist at all as historical persons?

Now, I get that some people are going to think differently about Adam and Eve, but that’s actually OK. My goal here is not to bring everyone to the same point of view. I’m not trying to convince someone that Adam and Eve are real or even that evolution is true. That’s not the point. 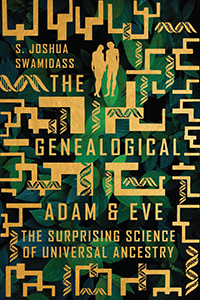 F&L: When people try to talk about evolution and human origins, the conversation often breaks down when they disagree. How do you avoid that?

JS: I think everybody’s questions need to be taken seriously and received with courage, curiosity and empathy. When we don’t do that, it leads to situations where we just don’t understand each other well, and it really degrades trust. The book is framed in virtues, and the first chapter focuses on how we handle questions, and the last chapter is how we focus on each other.

You can be entirely right, but if people don’t trust you, you’re not going to get anywhere. In fact, you might be right technically but not even be addressing the current concerns of everyone else. A great example of this is how we’ve thought about ancestry.

For a long time, many theologians have been saying that this whole idea of monogenesis is important. We all have to descend from Adam and Eve, they’ve said. And scientists have said that’s not true, we don’t have to all descend from two humans, and they’ve had an argument against it.

And it turns out that from a genealogical point of view, it’s entirely possible that if Adam and Eve existed, even if they existed recently, we all descend from them. So that’s one issue: we want to come with that posture of really taking questions seriously -- with courage, curiosity and empathy.

F&L: Some of the people who have blurbed the book are not religious. How do they fit into this dialogue?

JS: One thing that struck me and surprised me the most about many of these atheists is that they want to talk about the story of Genesis. They’re actually opinionated about how to interpret it. I thought that was the weirdest thing in the world.

Genesis touches on grand questions that they’re asking, too, and they want to be part of that conversation. Even if you think Adam and Eve are a myth and that there’s no reason to trust the Bible -- I mean, I’m a Christian; I trust the Bible. But if you don’t, you can think about it a bit as a probe, a way to understand better something about the science of ancestry, of who we are and who we came from, and also a framework to start engaging in some of these larger questions together.

F&L: You propose a “genealogical hypothesis.” Can you define that and explain why it opens up space for dialogue?

JS: The idea is, Is it possible that Adam and Eve were specially created by a direct act of God, suddenly, without parents, from dust and a rib, and that it happened recently in the past -- less than 10,000 years ago, say -- in the Middle East, and that they’re now ancestors, genealogical ancestors, to us all? Is that possible? When I started out, people were telling me that it was definitely disproven, but I found that there’s actually not any evidence to tell us that it’s wrong.

It turns out that if we allow for people outside the garden and if their lineage is intermixed with Adam and Eve, by A.D. 1 -- by the time that Jesus walks the earth -- if Adam and Eve existed, then we all descend from them.

This genealogical hypothesis would show that some key doctrines that people have been struggling with for a very long time really just are not in conflict with science. One of them is monogenesis, which is the idea that we all descend from Adam and Eve. What we know from our best science is that if Adam and Eve existed, we all descend from them. Second is the question that if there’s common descent from the great apes, then creation is false. But it turns out that both can be true at the same time.

That doesn’t necessarily prove that Adam and Eve existed or that if they existed they were created. Really, science doesn’t tell us. All we’ve found is the limits of science.

And large parts of society haven’t really been able to engage it in anything other than an oppositional approach, because they thought that deeply held beliefs were being threatened. This gives them some space for it.

F&L: Can you offer practical steps or advice for people who may be unsure of how to bring up science in their congregations more generally or how to create dialogue about Adam and Eve and evolution more specifically?

I’m not asking anyone to agree from the get-go with me, and I think that’s actually a good strategy. I just want to create ways for people to engage with us even when they disagree with us on some important things.

And part of what’s going on, too, is when it comes to origins, there’s been so much conflict that the best we can imagine is trying to get rid of the conflict. But there are better things than just that. There’s an opportunity, as I keep on saying, to engage larger questions together, even across disagreement.

And that’s more than just ignoring the conflict; it’s more than just talking about it in a way that’s tightly controlled so no conflict comes to the surface. We need to really engage with the differences to understand them in a context where we can even appreciate each other’s different points of view. And in this case, science actually helps us get there by creating more space for dialogue.

The historical and contemporary relationship between science and theology is more complicated than the persistent popular notion that they are at war with each other, says an expert on the history of creationism.